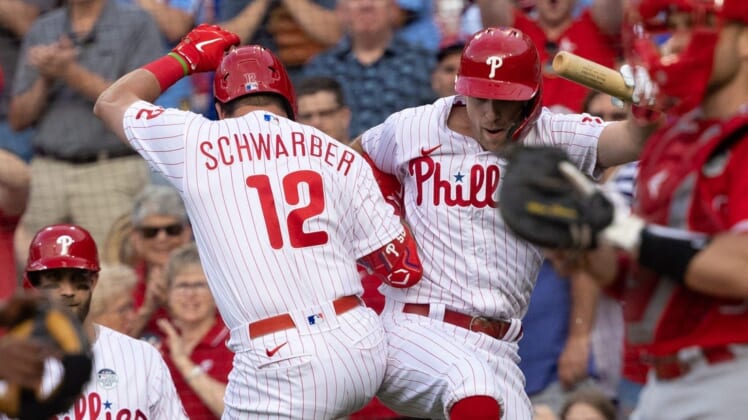 Bryson Stott also hit a three-run homer for Philadelphia, which finished with 10 hits and got a stellar performance on the mound by starter Zach Eflin.

Trout, who grew up in nearby Millville, New Jersey, was making his first appearance in Philadelphia since 2014 and continued his recent struggles. With Friday’s 0-for-4, Trout is hitless in his past five games, going 0 for 19 during that stretch. The longest hitless streak in his career is six consecutive games.

Trout isn’t the only Angel struggling — the loss was the Angels’ ninth in a row, their longest losing streak since 1999, when they had separate losing streaks of nine and 11 games. The club record for losing streaks is 13, set in 1988.

The Phillies offense got started immediately against Angels starter Chase Silseth (1-2), Schwarber leading off the bottom of the first with his first homer of the game. Stott hit a three-run homer in the second for a 4-0 Philadelphia lead, Silseth not surviving the inning.

Angels reliever Jaime Barria stemmed the tide for the time being, before Harper’s three-run homer in the fifth inning increased the Phillies’ lead to 7-0. Nick Maton’s RBI triple later in the inning made it 8-0.

Harper and Schwarber each hit solo homers in the sixth to cap the scoring for Philadelphia.

Eflin, meanwhile, was sharp throughout. He got out of a first-and-third situation in the first inning and didn’t allow another Angels baserunner to get into scoring position again until Max Stassi and Matt Duffy had back-to-back two-out singles in the seventh.

James Norwood pitched the ninth for the Phillies to complete the shutout.