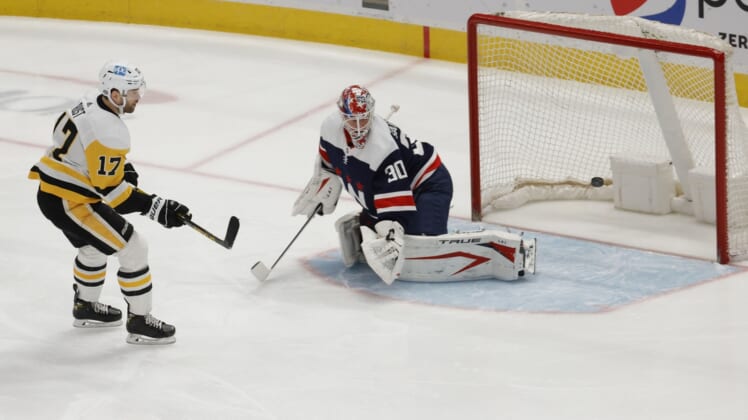 Bryan Rust scored two breakaway goals and goalie Tristan Jarry made 24 saves as the visiting Pittsburgh Penguins moved into first place in the East Division with a 3-0 victory over the Washington Capitals Saturday night.

The teams were tied for first in the East Division, and the victory moved the Penguins (34-15-3) into the solo lead with 71 points.

Washington (32-14-5, 69 points) has one game in hand on the Penguins. The Capitals still have five games remaining while Pittsburgh has four. Both teams already clinched playoff spots.

Rust scored unassisted goals early in the first two periods while Jarry denied the Capitals, especially in the final 25 minutes, and improved to 8-1-1 in his last 10 games.

The Penguins went 6-2-0 against Washington this season and won both games of this two-game set in D.C.

Both teams again needed to play without key players. Washington captain Alex Ovechkin sat out his fourth straight game with a lower-body injury while top defenseman John Carlson missed a second consecutive contest due to the same problem.

For the Penguins, there had been some hope that Evgeni Malkin might return after being out since March 16 with a lower-body injury, but he sat for a 23rd straight game.

The Penguins took a 1-0 lead when Rust scored 2:56 into the game. Washington’s Garnet Hathaway fell near the boards and lost the puck, and that let Rust skate in alone and beat goalie Ilya Samsonov (23 saves).

Rust notched his second goal 26 seconds into the second period. He blocked a Dmitry Orlov shot, beat the Washington defenseman to the puck down the ice and then put it past Samsonov for his 22nd tally of the season.

The Penguins made it 3-0 when Jeff Carter scored from in front after a Kris Letang feed with 9:17 left in that frame. On that goal, the puck appeared to bounce off Carter’s foot and into the net.

Washington’s offense had been quiet until that point but came to life in the final five minutes of that period. Still, Jarry robbed them several times to keep it at 3-0.