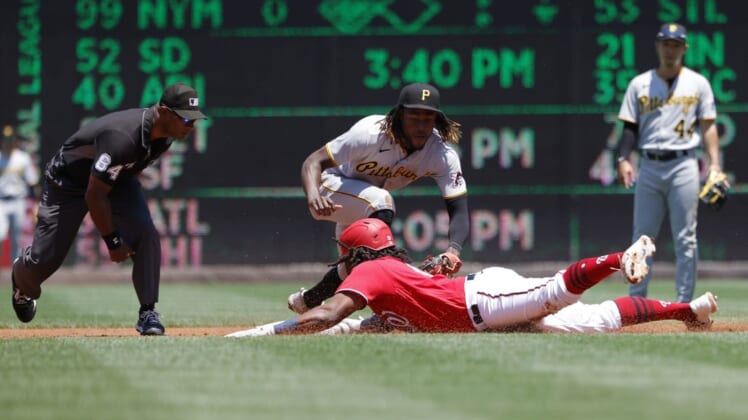 Bryan Reynolds hit three homers and drove in six runs, and the Pittsburgh Pirates rallied past the host Washington Nationals 8-7 on Wednesday to snap a five-game losing streak.

Pittsburgh trailed 6-5 when Michael Perez singled leading off the seventh. Hoy Park walked and Kyle Finnegan replaced Carl Edwards Jr. (2-2) for Washington. Ke’Bryan Hayes struck out, but Reynolds’ fly to left center carried into the Pirates’ bullpen for his third homer of the game and 15th of the season.

Daniel Vogelbach also homered for the Pirates, who averted the three-game sweep.

Josh Bell reached base five times with two doubles, a single and two walks for the Nationals, who had won three straight. The Nats out-hit Pittsburgh 16-9 but left 10 on base.

Paolo Espino started for Washington was lifted after 4 1/3 innings. He gave up four runs on five hits.

Hayes lined a single to open the game and Reynolds followed with a shot to center for a 2-0 lead.

Ehire Adrianza singled to start the second for Washington and scored on a double by Juan Soto to make it 3-2.

Vogelbach tied it with a solo homer to center with one out in the fourth.

The Pirates got runners to second and third with one out against Espino in the fifth. Steve Cishek came on and Hayes lined into a double play as Park left second on the hit and was tagged out at third. Jack Suwinski left third early but Washington did not appeal the play before leaving the field and the Pirates got the run.

Bell walked leading off the bottom half of the fifth and Cruz singled. Ruiz singled home Bell and Yadiel Hernandez doubled to score Cruz. Ruiz scored on Cesar Hernandez’s single and Washington led 6-4.

Reynolds made it 6-5 when he homered of Edwards to start the sixth.