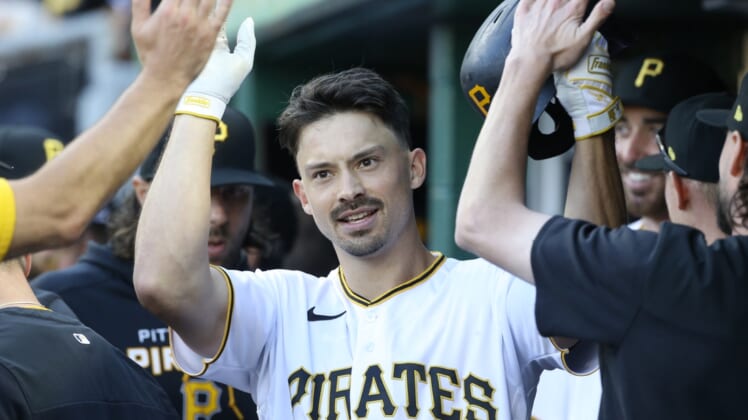 The rebuilding Pittsburgh Pirates have plenty of question marks, but Bryan Reynolds isn’t one of them.

The All-Star center fielder is one of the main building blocks for the Pirates, who continue their four-game series against the visiting Washington Nationals on Friday.

Reynolds, 27, avoided arbitration by signing a two-year, $13.5 million contract with the Pirates on Thursday afternoon. He promptly belted a two-run homer and reached base four times in the team’s 9-4 win over the Nationals later that evening.

Reynolds, who can become a free agent after the 2025 season, hit .302 with a career-high 24 homers and a league-leading eight triples last season.

“I really think we’ve got the bones to be a good, competitive team,” Reynolds said. “The fact that I get to be part of that for at least the next four years is great.”

One promising piece of the Pirates’ future was on display in the series opener. Rookie reliever Roansy Contreras struck out five batters over three scoreless innings for his first career victory.

The Pirates will turn to another young hurler on Friday, Mitch Keller (0-1, 9.00 ERA). The 26-year-old right-hander drew raves in spring training with increased velocity on his fastball.

Keller took the loss in his season debut on Saturday, allowing four runs on six hits over four innings. He ended his outing by retiring the Cardinals in order in the fourth.

“I think we definitely saw improvement there,” Pirates manager Derek Shelton said. “I thought the fourth inning was probably the inning he was the most aggressive, and we’ve just got to translate that into the first couple innings.”

Keller has gone 2-10 in 22 career starts at PNC Park and will be looking to snap a personal four-game losing streak at home. He has never faced the Nationals.

Washington will counter with right-hander Erick Fedde (0-0, 3.60), who turned in a solid season debut against the New York Mets on Sunday. Fedde, 29, received a no-decision after allowing two runs on five hits over five innings. He walked two and struck out five.

“I think I had all four pitches going,” Fedde said. “The cutter up was probably my best pitch. I think being able to mix throughout the whole game was what did it for me.”

Fedde, who is making his first career appearance against Pittsburgh, solidified his spot in the rotation after tossing 9 1/3 scoreless innings in spring training.

The Nationals’ unsettled outfield has received a spark from Yadiel Hernandez, who had three hits on Thursday and is 7-for-17 (.412) to start the season.

Hernandez, 34, has made a case for more playing time after hitting .273 with nine homers in 264 at-bats last season.

Washington manager Davey Martinez gave center fielder Victor Robles, who is 0-for-15 with six strikeouts, a day off Thursday.

“He’s been positive, and we’ve been very positive with him as well,” Martinez said. “We work with him. In BP, there’s more hard-hit balls. When we watch him swing, he’s staying more on top of the baseball. We’ve just got to continue to work with him.”

Nationals utilityman Dee Strange-Gordon was a late scratch on Thursday due to illness and is listed as day-to-day.