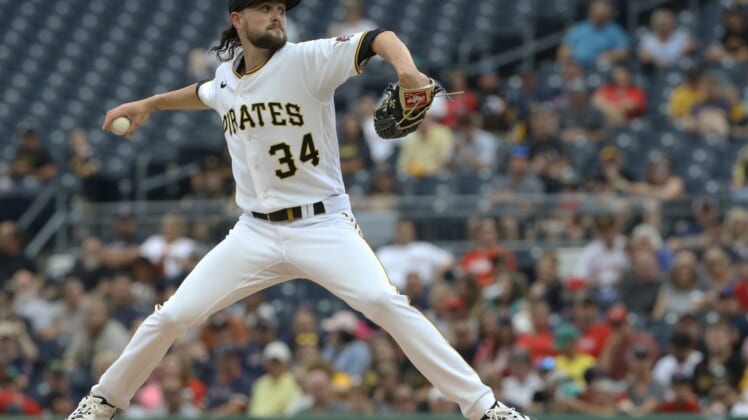 Bryan Reynolds homered twice and Kevin Newman matched his 3-for-4 night with three runs scored as the Pittsburgh Pirates snagged Thursday’s 8-2 win in the finale of a three-game series against the visiting Boston Red Sox.

Reynolds tagged Red Sox starter Josh Winckowski (5-6) for two-run shots in the first and fifth innings (his third and fourth homers in the last three games), drove in four runs and scored three. Twelve of his team-leading 20 long balls this season have given the Pirates the lead.

Tommy Pham and Rafael Devers drove in runs and five players recorded a single hit for Boston, which had won its previous three games.

Winckowski was charged with six hits and six runs in five innings while starting in place of Nathan Eovaldi, who was scratched with a sore trap muscle.

For the second straight game, Pittsburgh took a 2-0 lead on one first-inning swing by Reynolds. The Pirates’ center fielder hit a high two-run homer out to right, following up Newman’s one-out single to left.

While Boston southpaw Rich Hill put up zeroes for the rest of his five-inning Wednesday outing after giving up two runs in the first, the Pirates were able to extend their lead against Winckowski. Gamel lifted a two-out, two-run double over the head of left fielder Pham to make it a 4-0 game in the third.

Pittsburgh’s lead increased to 6-0 in the fifth after Newman and Reynolds posted back-to-back hits again. Following Newman’s one-out single, Reynolds belted the 3,000th all-time homer at PNC Park with a two-run shot out towards right-center.

In the sixth, Michael Chavis lined a pinch-hit RBI double inside the left-field line to plate Greg Allen from first. Tyler Heineman then dropped a hit into left, bringing in a second run against Boston reliever Austin Davis.

Despite his record, Brubacher has allowed two earned runs or fewer in 12 of his 23 starts this season.