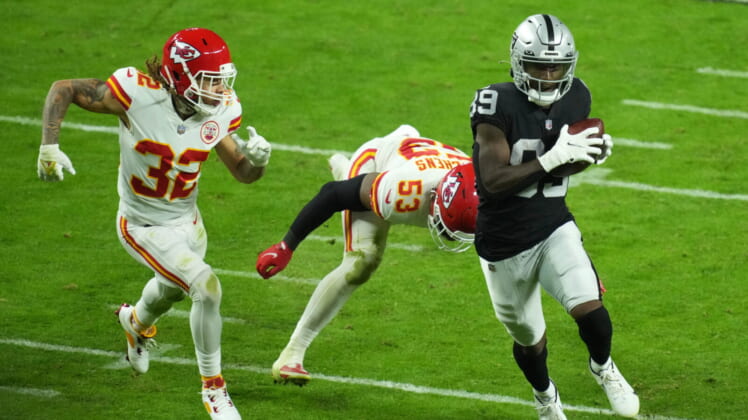 The Las Vegas Raiders need more from Bryan Edwards in the passing attack. This season, he’s shown up in the fourth quarter and overtime period, but the second-year wideout has to make a more significant impact on a down-to-down basis.

Of course, Bryan Edwards is dependent on offensive coordinator Greg Olson’s play-calling and quarterback Derek Carr connecting with him downfield, but the Raiders shouldn’t have an issue getting him more involved with extra targets to go around following Henry Ruggs III’s release.

Based on what we heard about the Raiders’ assessment of Edwards and the offseason buzz around him over the past two offseasons, he’s equipped to become a playmaker halfway through his second term.

Let’s go back to a few post-draft and offseason reports.

When the Raiders selected Edwards with the 81st overall pick in the draft, they had a clear plan for him, per NFL Insider Adam Caplan (h/t Marcus Mosher of Raiders Wire):

After this season, look for third-round pick Bryan Edwards, who is still rehabbing his surgically repaired [foot], to possibly start at the “X” position. Edwards doesn’t figure to have much of a role this season, but he was drafted with the belief that he could start down the line. And the Raiders were one of many teams that felt he was a first-round talent just based on tape study, but his injury history dropped him down draft boards.

During a chaotic 2020 COVID year, Bryan Edwards bounced back quickly from his injury and took reps with the starters. Still, we couldn’t expect much from him after an atypical offseason. On top of that, the South Carolina product battled foot and ankle issues during the regular season and missed four contests. Fortunately, tight end Darren Waller posted career numbers, and wideout Nelson Agholor became a pleasant surprise in the vertical passing game.

Nevertheless, Carr talked about his “trust” in Bryan Edwards (per Las Vegas Review-Journal).

“Bryan is a very violent route runner and that’s a good thing,” Carr said. “Then when the ball is in the air, he reminds me of Davante [Adams]. Someone where there’s just a trust. I could throw it up one-on-one and those 50/50 balls are 98/2 for us…”

Keep your focus on the word trust because it appears again when ESPN’s Jeremy Fowler nailed down some key points from Raiders’ training camp this past summer.

“…the trust between Edwards and QB Derek Carr is palpable at Raiders HQ,” Fowler wrote. “This is Edwards’ first healthy camp, so he has opened some eyes. In the red zone, Carr has no issues throwing to Edwards’ shoulders and letting him outmuscle the corner.”

Even though Edwards didn’t take a 2021 preseason snap, he had a full training camp and flashed early in the season with some crucial catches during the Raiders’ 3-0 start.

After hauling in just 11 passes for 193 yards and a touchdown during his rookie campaign, Bryan Edwards had made strides.

Now, with a depleted wide receiver corps and Zay Jones providing about one big catch per game, Carr has to exhibit more of that trust he has in Edwards. At this time, Vegas’ offense would benefit tremendously if their connection took another step toward consistency. Wideout DeSean Jackson, who only played 17 percent of the offensive snaps last week, has a very small role as he picks up the system.

Before you dismiss Edwards as a potential breakout player in the second half of the season, he’s shown enough flashes to earn more targets. The 23-year-old wideout has recorded a touchdown reception in two of the last three games, which gives him just as many scores as Waller. On top of that, among players with at least 17 catches, Edwards leads the league in yards per reception (20.7).

Vegas has a unique offensive playmaker in Edwards, who’s built to box out defenders and win the 50-50 balls and equipped to track targets 20-30 yards downfield. That sounds like a first-round talent with breakout potential if featured in an offense.

With the ground attack coming off a no-show performance against the Kansas City Chiefs, the Raiders will need to lean heavily on the passing game, which means someone has to sway some coverage away from Waller on the perimeter as Jackson learns the system and Hunter Renfrow operates primarily out of the slot on short-to-intermediate routes.

Why not Bryan Edwards? The trusted first-round talent who’s healthy and able to haul in big-chunk plays. Averaging 4.3 targets per game, he should get a few more looks if the Raiders want to see him reach his full potential.