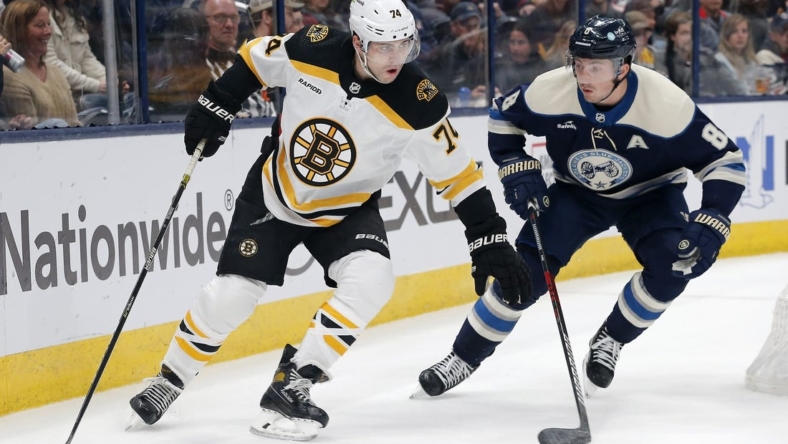 The Boston Bruins scored three goals in the second period and Linus Ullmark made 30 saves en route to a 4-0 win over the host Columbus Blue Jackets on Friday night.

Matt Grzelcyk, Charlie Coyle, Jake DeBrusk and David Pastrnak all scored for the Bruins, who have won five consecutive games and improved to 8-1-0.

Boston had recorded eight victories in a single month of October only three previous times in franchise history.

Ullmark backstopped Boston to the victory, stopping all 12 shots he faced in the opening frame of his fifth career shutout. He finished the game with an 11-save third period.

The team’s 16 points after the first nine games of the season are a franchise record.

Elvis Merzlikins made 25 saves over the first two periods before Daniil Tarasov entered the Columbus net in relief. Tarasov stopped all six shots he saw in the third.

Defenseman David Jiricek, an 18-year-old who was drafted sixth overall this summer, made his NHL debut for the Blue Jackets.

Columbus has lost back-to-back games and three of its last four.

A minute after completing a penalty kill on which Ullmark made four strong saves, the Bruins drew first blood at the 8:43 mark. Grzelcyk netted his first goal of the season, firing a wrist shot from the left circle that beat Merzlikins high.

Boston had a 14-12 shot advantage after the first period, an admirable performance after allowing three goals in the opening frame of the second game of its previous back-to-back last Tuesday in Ottawa.

Coyle doubled the lead with the Bruins’ first short-handed goal of the season, stealing the puck from Johnny Gaudreau along the wall and bursting the other way for a backhand shot at 4:30.

A shot block sent DeBrusk on a breakaway, and he sent a shot high glove to increase the Boston lead 15:07 into the middle frame.

With 26.1 seconds left in the period, Pastrnak let a wrister fly around his defender for his seventh goal of the season and eighth point in a four-game span.

A power play in each period couldn’t help Columbus crack the scoreboard. Ullmark flashed the glove to stop a Patrik Laine slapper from the right circle with 6:23 left in regulation.