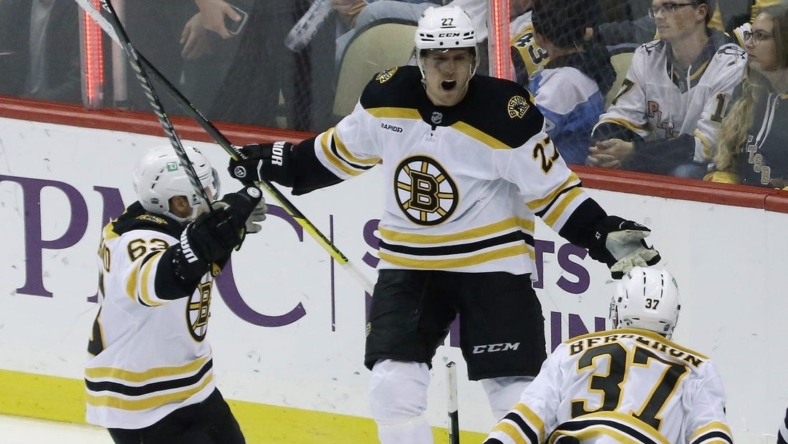 Hampus Lindholm went coast-to-coast and scored from the left hash marks at 3:37 of overtime Tuesday as the visiting Boston Bruins erased a three-goal deficit to win their sixth straight, 6-5 over the Pittsburgh Penguins.

Boston goaltender Linus Ullmark allowed five goals on 18 shots before being pulled in the second. Jeremy Swayman stopped all four shots he faced but left with possibly a left leg injury at 5:42 of the third when teammate Patrice Bergeron got knocked into him. Ullmark returned and stopped six shots.

Evgeni Malkin had a goal and an assist, and Sidney Crosby, Bryan Rust, Josh Archibald and Rickard Rakell also scored for the Penguins, who have lost five straight.

The Bruins, were without center David Krecji (upper body) and lost defenseman Derek Forbort after he blocked a shot in the first.

Crosby gathered a deflected pass by Jeff Petry and scored from the left hash marks 30 seconds into the first.

Lauko scored his first NHL goal at 13:20 of the first, off a feed from Nick Foligno, to put Boston ahead 2-1.

At 1:47 of the second, a Pierre-Olivier Joseph pass deflected to Malkin, who tied it from near the right post.

During a delayed penalty call, Archibald gave Pittsburgh at 3-2 lead on a one-timer at 8:42 of the second.

On a power play, Marchand rifled in a one-timer at 12:57 of the second to pull Boston to within 5-3.