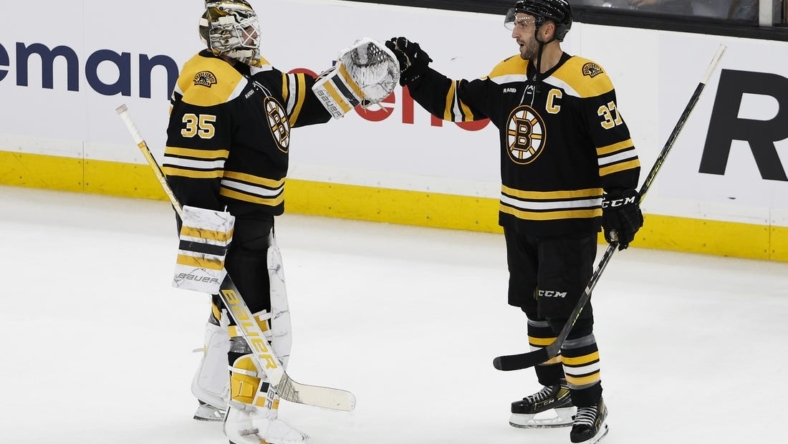 The Boston Bruins have won three consecutive games to vault to the top of the NHL standings.

They’ve done so in different ways, taking games to a shootout and overtime before a defensive-minded effort in closing out Tuesday’s 3-1 win over Dallas.

The Detroit Red Wings will be Thursday’s visitors to Boston, where the Bruins are 5-0-0.

“I didn’t think (Tuesday) was a very good offensive game for us. I thought there were plays to be made that even our elite offensive players weren’t seeing,” Bruins coach Jim Montgomery said. “But our checking is really improving. We won with defense, and of course, Linus (Ullmark) was really good in the net again.”

Ullmark has won the last three games, but Jeremy Swayman could go back in goal as the Bruins start a back-to-back; they visit Columbus on Friday night.

There has been a lot to like in the team’s game. On Tuesday, David Pastrnak netted his first power-play goal of the season and set up Taylor Hall for a one-timer of his own.

Defenseman Brandon Carlo returned after missing four games due to a concussion. He keyed the late-game effort before Patrice Bergeron clinched the win with an empty-net goal.

“I thought he was a beast,” Montgomery said. “We’ve been able to have success without Carlo and (Matt) Grzelcyk, and (Charlie) McAvoy is still going to be out for a while, but it’s nice to know that we have players coming back, which makes us better.”

The B’s blocked 11 shots, while Connor Clifton set the tone with three hits and a fight.

That effort isn’t lost on Ullmark, who has emerged as a No. 1 goalie for Boston’s new staff.

“We’re doing this together. It’s not just me,” Ullmark said. “There are guys in front of me blocking shots left and right and doing the right things over and over and over again. It’s fun to see.”

Brad Marchand (hip) could be the next Bruin back. After practicing alongside Bergeron and Jake DeBrusk on Wednesday, he is ahead of schedule and will play before Thanksgiving.

The Red Wings took a 1-0 lead 2:56 into their Tuesday game, but four New Jersey goals in a row put the eventual 6-2 defeat out of reach.

The Wings were outshot 41-22 as coach Derek Lalonde thought goaltender Alex Nedeljkovic was left out to dry multiple times.

Lalonde hopes the extended lapse over the first and second periods can offer an early season lesson to help his team reset.

“We’ve had a good start, but this is a huge lesson,” Lalonde said. “We are not good enough to have lapses in our game and to get away from what makes us successful.”

Those leaders will be crucial in helping the Wings return to the ways of their fast start and have success.

“We’re in the process of becoming a team that wins a lot of games but there’s a lot of lessons to be learned through that process,” forward Andrew Copp said. “We’re going to have to build from (Tuesday) and understand when we don’t have our A-plus game we have to have a pretty good B-plus game.”