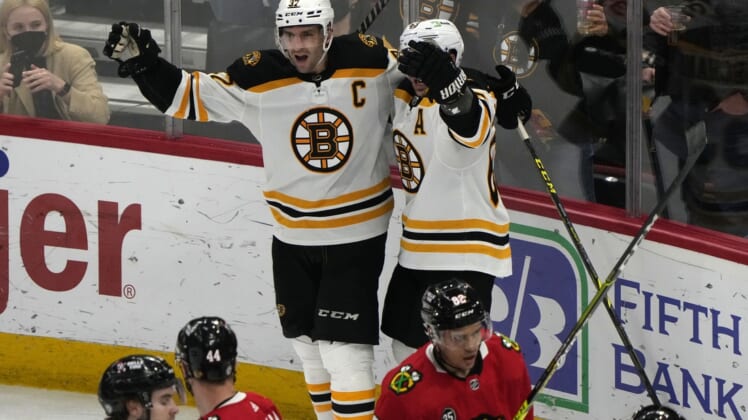 The Boston Bruins will aim for their fourth win in a row when they face the Minnesota Wild on Wednesday night in St. Paul, Minn.

Boston will play on short rest following a 2-1 overtime win against the host Chicago Blackhawks on Tuesday night. Patrice Bergeron scored in regulation and Matt Grzelcyk scored in overtime for Boston, which improved to 10-1-1 over the past 12 games.

The Bruins have improved their playoff chances and could strengthen their roster ahead of next week’s trade deadline, but coach Bruce Cassidy is not too worried about hypotheticals.

“(Bruins general manager Don Sweeney) always has discussions with us,” Cassidy said. “The state of the team, or where do you see needs? Depth pieces.

“If there’s a big (trade), we’re outside of that. But at the end of the day, there’s always that discussion, and I imagine it will heat up over the next week.”

Minnesota also is eager to bolster its chances as the postseason approaches. The Wild started strong but are winless in two straight games and are 4-9-1 in their past 14. Like the Bruins, they are in fourth place in their division, with both teams two points out of third.

On Tuesday, the Wild shipped Nico Sturm to the Colorado Avalanche in exchange for Tyson Jost in a swap of forwards. Jost, 24, had six goals and eight assists in 59 games with Colorado this season.

Jost, who played in college for neighboring North Dakota, has 103 career points in 321 NHL games.

“We’re very excited to have Tyson,” Wild general manager Bill Guerin said. “We think there’s a lot more potential for Tyson to grow and become the player that he wants to be.”

The Wild and Bruins have met once this season, with Minnesota hanging on for a 3-2 win in Boston on Jan. 6. Sturm scored on the power play for the Wild, who also received goals from Kirill Kaprizov and Matt Boldy.

Linus Ullmark stopped 19 of 20 shots against the Blackhawks on Tuesday night to improve to 18-9-2 on the season. If the Bruins opt to go with the fresh goalie on Wednesday, that means Jeremy Swayman would get a chance to improve upon his 17-7-3 record, 2.06 GAA and .926 save percentage.