Bruins making adjustments with Jets ahead 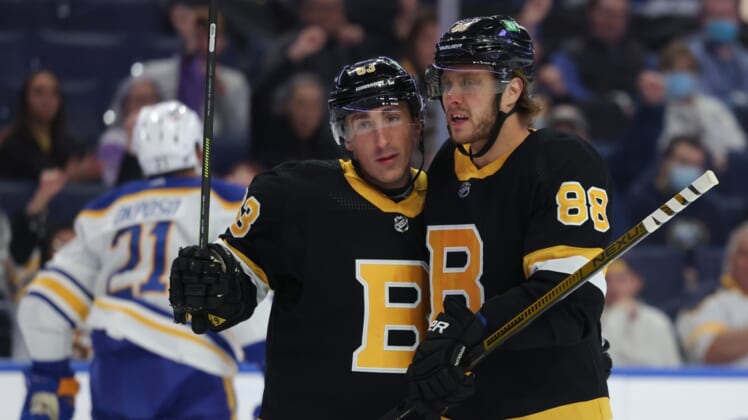 The Boston Bruins struggled to hold the fort in their last game without injured captain Patrice Bergeron.

The Bruins will be without the four-time Selke Trophy recipient for at least another contest on Friday when they continue their four-game road trip against the Winnipeg Jets.

Bergeron returned to Boston prior to the team’s 4-2 setback to the Minnesota Wild on Wednesday. The 36-year-old is dealing with the re-emergence of a previous arm injury that is at risk of infection, Bruins coach Bruce Cassidy said.

In Bergeron’s absence, Tomas Nosek was promoted to the top line with Brad Marchand and Jake DeBrusk and won 12 of 16 faceoffs versus the Wild. Jack Studnicka could assume Nosek’s spot after being unable to play Wednesday following a late recall from Providence of the American Hockey League.

“You can’t replace him, but I thought Nosek did a good job in the faceoff circle for sure,” Cassidy said after the team saw its three-game winning streak come to a halt. “We won some draws, won one with the goalie out 6-on-5, that’s one we rely on ‘Bergy’ for.”

David Pastrnak was held off the scoresheet for the fourth time in six games on Wednesday. Pastrnak, who leads the team in goals (33) and points (61), scored the go-ahead goal early in the third period of a 3-2 win vs. Winnipeg on Jan. 22.

Marchand set up that power-play goal for Pastrnak against the Jets. The pesky Marchand moved within two points of his teammate for the club lead after scoring with the man advantage early in the second period on Wednesday.

“It’s nice to get one, especially with ‘Bergy’ being out,” Marchand said after scoring his first goal since tallying twice on Feb. 26. “That point of the game, it was nice, but unfortunately we didn’t close it out and that’s all that matters at the end of the day is if you get the points.”

The Jets have been earning points of late. Winnipeg improved to 6-2-1 in its past nine games following a 7-3 victory over Vegas on Tuesday.

Kyle Connor extended his goal-scoring streak to five games and added a pair of assists against the Golden Knights. His team-leading 38 goals are tied for his career high set in 2019-20, while his 72 points are one shy of his career best.

“Unbelievable. He’s one of the premier goal scorers in the league,” Jets center Adam Lowry said. “… He’s a guy that can score in a variety of ways. He’s so quick, his release is so deceptive, and he just finds the areas and the puck just seems to find him. He can beat you. He doesn’t need a lot of time, he doesn’t need a lot of space. He’s hot right now and hopefully that continues.”

Captain Blake Wheeler, who leads the team in assists (36), carries a five-game point streak (two goals, five assists) into a tilt versus his former team. He played parts of his first three NHL seasons in Boston.