Bruins look to be less ‘selfish’ vs. Senators 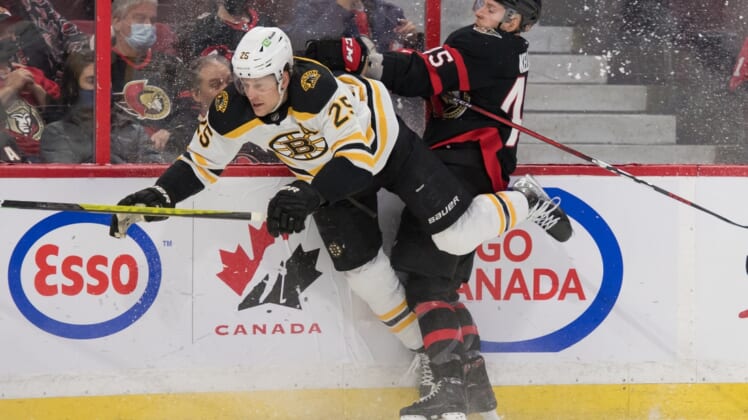 The Boston Bruins will look to move out of a rare slump Thursday night when they host the Ottawa Senators in the second game of a three-game homestand.

Despite being 8-4 in its last 12 games, Boston (45-23-5, 95 points) has suffered back-to-back regulation losses for the first time in more than two months. The latest was Tuesday’s 4-2 setback to St. Louis.

The Bruins had a 2-1 lead after one period but the Blues won their sixth consecutive game by scoring three unanswered goals during a 15-minute surge bridging the second and third periods. Patrice Bergeron and Marc McLaughlin scored goals for Boston.

“They move the puck well, they support the puck well, their D are very active, but we made a lot of mistakes,” Bruins coach Bruce Cassidy said. “On two of (their goals), we had the puck on our stick. It was very similar to Washington. There’s a trend here. …

The Bruins also squandered a 2-1 lead against the Washington Capitals on Sunday, losing 4-2.

“(There’s a) lack of execution,” Cassidy said. “I think we’re selfish, guys are holding the puck too long wanting to make the play instead of letting the puck do the work.”

Bergeron’s 20th goal of the season came just 15 seconds after the Blues took a 1-0 lead. McLaughlin scored his second goal in as many NHL games at TD Garden later in the opening frame. But, it was not enough.

“Playing with two really skilled players like (Erik Haula and Taylor Hall), you definitely have to get open for them,” said McLaughlin, a rookie out of Boston College. “Find those soft areas on the ice because they’re going to make those plays.”

It was a tough Tuesday for Boston in more ways than one.

Not only were 38-goal scorer David Pastrnak (undisclosed injury) and defensemen Hampus Lindholm (lower body) and Matt Grzelcyk (upper body) out of the lineup, but another top blueliner Brandon Carlo was lost in the first period and didn’t return.

Cassidy said he is “cautiously optimistic” that Grzelcyk will be able to return, but Carlo didn’t skate on Wednesday and “has to get further evaluation” after leaving the previous night’s game.

“It’s a good feeling for a young group to win a grinding kind of game,” Senators coach D.J. Smith said. “… Everyone knows both of these teams are a long way from a finished product, but you can also see how much young talent was on the ice tonight.”

Tim Stutzle scored twice and assisted on Drake Batherson’s go-ahead goal in the second period. Austin Watson also had a goal and an assist, and Anton Forsberg made 24 saves in the victory.

“To score against the team that I grew up watching as a kid and what inspired me to want to play in this league, it’s special,” said Watson, a Michigan native who is now one point shy of 100 in his career.

Ottawa played without defenseman Artem Zub, who was scratched due to a non-COVID illness. Batherson was back in the lineup after missing three games with an illness.

Stutzle has played and logged a point in each of the last two games after missing two due to a knee injury.