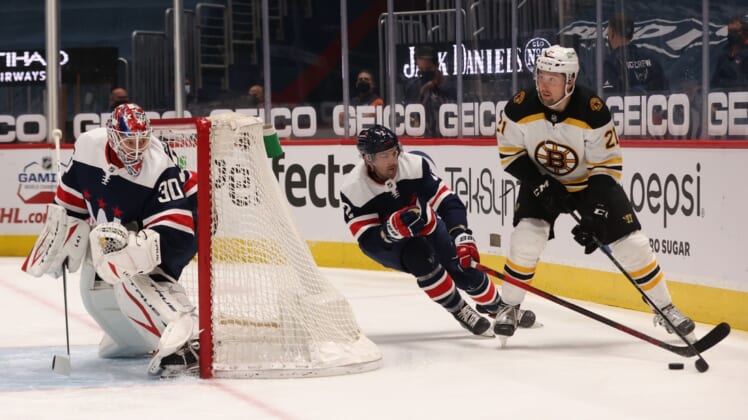 Brad Marchand and Craig Smith each finished with a goal and an assist as the visiting Boston Bruins scored a 4-2 victory over the Washington Capitals on Thursday night.

The Bruins also were helped by another strong performance from rookie goalie Jeremy Swayman. He made his NHL debut Tuesday and won before registering 31 saves in this victory.

Marchand’s goal was the 30th short-handed tally of his career.

Alex Ovechkin scored once for the Caps and became just the eighth player to register 16 or more straight 20-goal seasons, and only the fourth to do it from the beginning of his career. The power-play goal gave him 266 in his career and moved him past Brett Hull into second place all-time.

Boston dominated play in the first period and took a 2-0 lead, thanks to goals from Jeremy Lauzon and Anton Blidh — each player’s first goal this season.

Lauzon scored first, just 33 seconds into the game, when he fired a long shot that somehow trickled between the pads of Washington goalie Ilya Samsonov.

The Bruins kept the pressure on and it paid off when Blidh scored at 16:02 on an unusual play. Justin Schultz of Washington tried to send the puck around the boards from behind Samsonov, but instead the puck bounced in front to Blidh, who put it away.

That goal was unassisted, and Marchand did the same thing 4:09 into the third period — short-handed — and stretched the lead to 3-0. After that, though, the Caps put on a rally.

Washington got power-play goals from Ovechkin and Oshie just 19 seconds apart. Ovechkin got his on a blast from the left circle with 9:52 remaining in the second period.

Oshie then scored from nearly the same spot 19 seconds later to cut the lead to 3-2.

But Boston put it away when Smith scored with 3:05 left in the third period.