Bruins collect 10th win of season after pulling away from Rangers 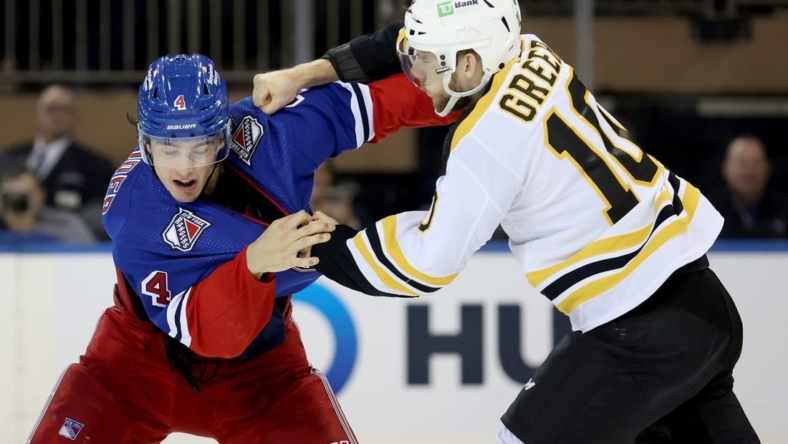 Trent Fredric scored the tiebreaking goal 6:04 into the third period as the visiting Boston Bruins continued their early season surge with 5-2 victory over the New York Rangers on Thursday night.

The Bruins improved their NHL-best record to 10-1-0 and won their seventh straight. It is Boston’s first seven-game winning streak since winning eight straight since early in the 2019-20 season and the first time it opened with 10 wins in 11 games.

Fredric netted the game-winner after getting into a second-period fight with New York’s Barclay Goodrow.

He scored his second goal of the season after getting a backhanded pass from Nick Foligno after New York goalie Igor Shesterkin could not control the rebound of Connor Clifton’s shot. After getting the pass from Foligno, Fredric released a wrist shot from the right circle and that caromed off Goodrow’s skate and in.

Shesterkin finished with 32 saves and took his first regulation loss this season (7-1-2).

Before Fredric scored, the Bruins took a 2-1 lead 2:56 into the third when Coyle scored for the fourth straight game by converting a tap-in after getting by New York defenseman Jacob Trouba and converting the cross-ice pass from Lindholm.

Pastrnak continued his hot start almost by accident after Taylor Hall blocked a shot by New York defenseman Zac Jones. After getting possession, Pastrnak streaked down the right side, eluded a check by Vesey and his backhanded pass from the bottom of the right circle intended for Hall deflected into the net.

New York tied it with 9:39 remaining when Zibanejad spotted Vesey streaking to the net by defenseman Anton Stralman. Zibanejad then made a cross-ice pass to Vesey, who converted the tap-in for his first goal with the Rangers in over three years.