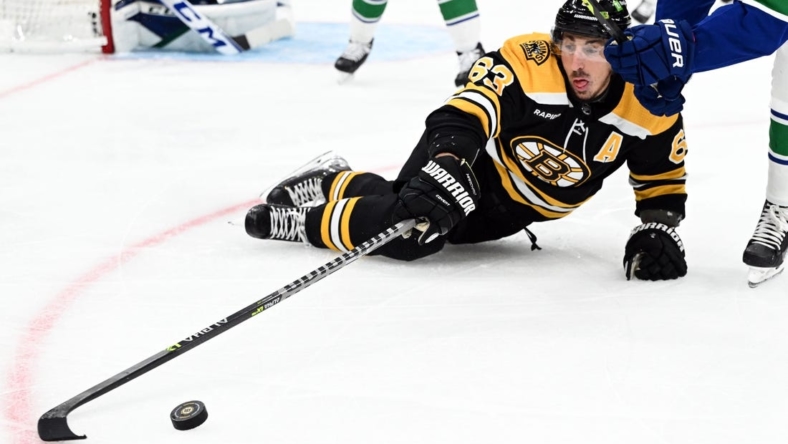 Connor Clifton had a goal and an assist while David Pastrnak dished out two helpers for Boston, which is on a four-game win streak and has won a franchise-record nine straight at home to begin the season.

Patrice Bergeron, Pavel Zacha, Brad Marchand and Tomas Nosek also tallied as the Bruins upped their 2-1 lead after one period to 4-1 after two.

Lindholm’s three-assist game was his second this season and put him halfway to his career-high point total of 34 through just 16 games.

The Canucks are 1-3-0 on their current five-game road trip.

Both teams went 2-for-6 on the power play.

The Bruins drew first blood at 7:17. Clifton ripped a one-timer from the top of the right circle after Taylor Hall circled the net and sent a pass back from below the goal line.

At 9:05, Miller drove the left side and tucked a tying goal between Ullmark and the post on the power play. Quinn Hughes’ head feed started the play, giving him an assist in his last 10 games.

Boston took a 2-1 lead with 2:31 left in the first when Bergeron redirected Pastrnak’s feed in the slot, his third power-play goal in four games.

Zacha’s hard one-timer from the right circle capped a 4-on-4 rush, giving the Bruins their first two-goal lead at 11:19 of the second period.

Just 12 ticks into a power play, Pastrnak sent a cross-ice feed to Marchand for a wrist-shot goal with 2:37 left in the middle frame.

In the third, Dries scored a man-up goal from a tight angle at Ullmark’s left, cutting Vancouver’s deficit to 4-2 at 4:34.

Nosek iced the game with his first goal since Jan. 2 — a short-handed empty-netter — with 1:58 left.

Vancouver forward Vasily Podkolzin didn’t return due to injury after a fight with Boston’s A.J. Greer in the first period.