Bruins bid to get back on track, host Devils 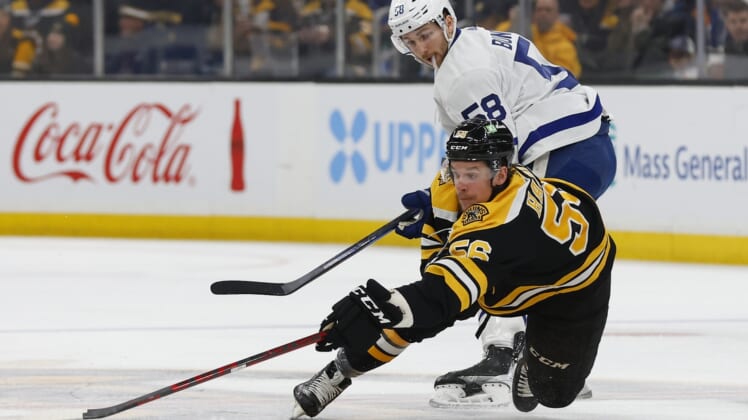 The Boston Bruins look to bounce back from seeing their four-game win streak come to a halt when they host the New Jersey Devils on Thursday night.

“Obviously, we weren’t prepared to play,” Bruins coach Bruce Cassidy said. “… You hope it’s a one-off. We’ve been going pretty well, and the guys were trying to work their way back in the game, whereas early in the year I don’t know if we got feeling sorry or doubted ourselves. We’re well beyond that in these types of games.”

David Pastrnak scored a power-play goal at 5:59 of the first period on Tuesday. The Maple Leafs then scored five straight goals and held a 6-2 lead at the second intermission.

Curtis Lazar and Taylor Hall scored in the third period for the Bruins.

“When a game is out of sight like that, it’s about maintaining good habits and building towards the next game,” said defenseman Charlie McAvoy, who had two assists. “Anything can happen, so we got within striking distance. It’s about not continuing to snowball negatives, let’s get back to playing our game and find something we can feel good about.”

“With other people around, that’s what makes your team better is internal competition,” Cassidy said. “We may have done it anyway, to be honest with you. So, this isn’t the end-all be-all, but it certainly accelerated the process.”

Linus Ullmark will start in goal after turning aside all seven shots he faced in relief of Jeremy Swayman.

The Devils have been idle since Sunday’s 3-2 shootout win over the Montreal Canadiens. The victory was New Jersey’s second in the last seven games (2-5-0).

The Canadiens scored the tying goal with just 42 seconds left in the third period and nearly won the game after a shot rang off both posts. Yegor Sharangovich scored in the seventh round of the shootout, and Nico Daws (31 saves) preserved the win with a stop on Montreal’s Paul Byron.

“It was a gratifying win,” Devils coach Lindy Ruff said. “We’re focusing on play away from the puck. We gave up a few rush opportunities right off to start but got a great save from our goaltender that first minute. After that, we started to settle down.”

The Devils received a boost with Miles Wood’s return to the lineup on Sunday. He missed the first 65 games after having surgery to repair a hip injury.

“It was great to get him back,” Ruff said. “I think it’s going to take a little bit to get him back up to full speed. There were some shifts I liked, some short shifts. You have to get used to that pace. … For his first game, I thought he did well.”

Prior to the game, the Bruins will honor the career of goaltender Tuukka Rask with a ceremonial puck drop. The former Vezina Trophy recipient retired last month.