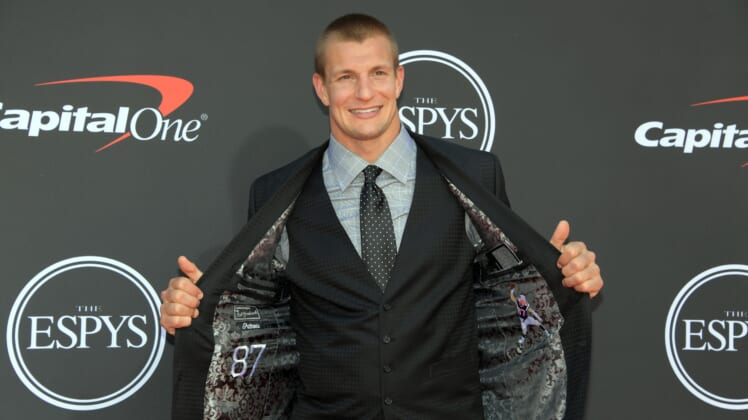 Rob Gronkowski is back in the NFL as a member of the Tampa Bay Buccaneers. But he still holds the WWE’s 24/7 championship belt. That could lead to some interesting developments this coming season.

Arians’ message to Gronk about the 24/7 belt is hilarious

Speaking about Gronkowski on ESPN’s NFL Live on Thursday, Arians shared an awesome message, and a warning.

“He better keep his head on a swivel. I might take it from him,” he said, per Jenna Laine of ESPN.

The only request we have is that this takes place with cameras rolling.

Last month at WrestleMania 36, Gronkowski took the 24/7 belt. Now, he’s got to be on the lookout for someone to take it from him at any time, anywhere.

Funny enough, he recently talked about the possibility that his new coach could take it from him.

“Imagine coming out of the meeting room, and I’m like, looking to my left in the hallway coming out of the tight end meeting room, looking to the right to make sure no one else is out of the meetings yet,” Gronkowski said on his Gronk’d UP podcast. “I think I’m in the clear. I start walking down the hallway because the other players are in the meetings. And all of a sudden, Coach Arians just comes out of nowhere with a flying elbow, takes me out and pins me, and becomes the 24/7 champ.

It sure sounds like Gronk is preparing for an NFL experience that’s a heck of a lot different than the Patriot Way.