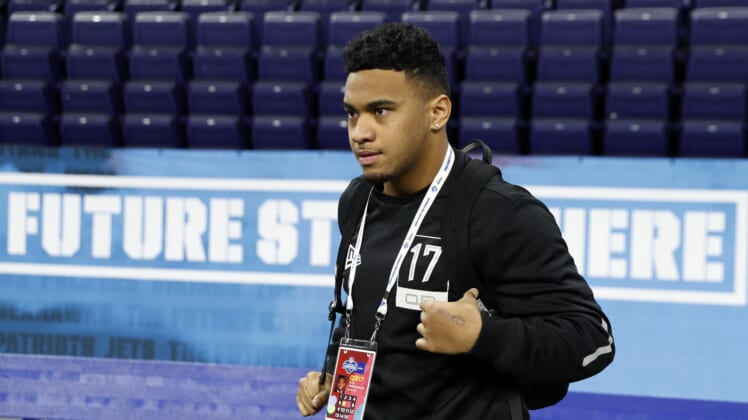 The Miami Dolphins landed their franchise quarterback of the future in Tua Tagovailoa. As they look ahead tot eh 2020 NFL season, the Dolphins must decide when it will be the right time to let Tagovailoa start in his rookie season.

While there are certainly some medical questions, at least one respected NFL head coach believes the decision should be an easy one for Miami.

Bruce Arians: “I don’t know what you learn holding a clipboard watching”

Tampa Bay Buccaneers head coach Bruce Arians has plenty of experience working with young quarterbacks entering their first year in the NFL. From Peyton Manning and Andrew Luck even to his experiences with a young Ben Roethlisberger, Arians knows better than most what helps quarterbacks become successful.

So, if Tagovailoa’s health checks out after undergoing hip surgery in 2019, Arians suggests the Dolphins let their top pick see the field right away.

“I don’t think you learn anything holding a clipboard,” Arians said, via 100.9 FM (H/T JoeBucsFan.com). “You know, I had Peyton Manning his first year, Andrew Luck his first year, Ben [Roethlisberger] was one of those guys that went in by accident because Tommy Maddox got hurt. You miss all the practice reps, you miss the game reps. I don’t know what you learn holding a clipboard watching.”

Durability and availability are the obvious concerns with Tagovailoa, given it hurt his stock before the 2020 NFL Draft. However, he looked sharp during an individual Pro Day and the Dolphins were confident drafting him with the No. 5 pick.

Will Tua Tagovailoa start in Week 1 for the Dolphins?

Miami doesn’t need to rush Tagovailoa into the starting role. Ryan Fitzpatrick is familiar with offensive coordinator Chan Gailey and the veteran quarterback threw 20 passing touchdowns and had an 85.5 quarterback rating this past season. Given NFL players also might not be able to return to their team’s facility until training camp, Tagovailoa’s lack of practice reps will hurt him.

Despite the obstacles Tagovailoa will face, he is still expected to start by Week 1. He was one of the best quarterbacks in college football and demonstrated that he has just as much talent as Joe Burrow. As long as he is healthy and is given a chance, expect Tagovailoa to be on the field when the Dolphins kick off their 2020 season against the New England Patriots.