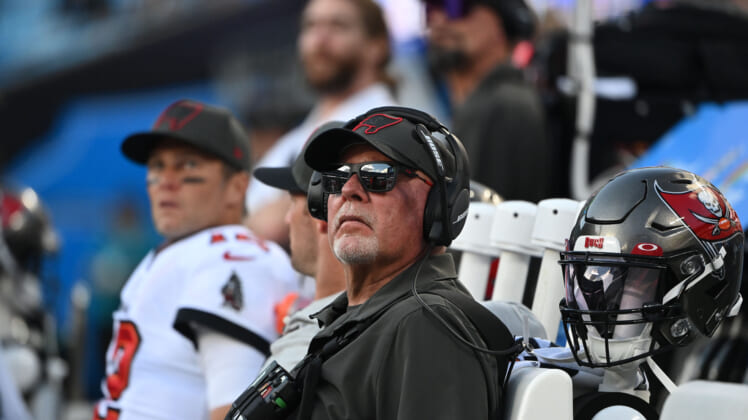 Tampa Bay Buccaneers head coach Bruce Arians recently missed some time after going on the NFL’s COVID reserve list. While he’ll return to his typical position today, Arians could end up missing even more time later this season, likely during the playoffs.

Appearing on his normal segment during FOX NFL Sunday, Jay Glazer reported Arians has recently ruptured his Achilles. Arians has done his best, trying to not call too much attention to it, without even many of his own players being aware before today. Normally, this typically wouldn’t be much of a story for a head coach suffering a lower leg injury, in this case, it is.

While his tendon is partially ruptured, it has not yet completely torn. Arians mentioned, if/when it does fully tear, he will require immediate surgery. One that could cause him to miss the rest of the playoffs. Should such a situation occur, assistant head coach Harold Goodwin would presumably take over some of the coaching duties belonging to Arians once again as he did while Arians was out of commission.

If Bucs find way to repeat, Bruce Arians may lose his coordinators

If Tom Brady and the Bucs are ready to run it back and repeat, making it to the Super Bowl, they may have to do so without Arians down the stretch. There is no word on how long Arians may have to miss time, but even he admitted, he has “no clue” what would happen. But he does know, if it fully ruptures, he will have immediate surgery.

Should the Bucs continue without Arians, playing just as strongly as they did with him, it would likely boost the chances of current coordinators Byron Leftwich and Todd Bowles’ chances to land a head coaching opportunity elsewhere. Which is something Arians has been a big proponent of in recent seasons. The Jacksonville Jaguars are already interested in interviewing Bowles for their vacancy, and Leftwich will likely follow.