The Cleveland Browns have looked sharp throughout the preseason, and will hit the road to square off against the Atlanta Falcons in Sunday’s Week 3 exhibition finale. Continue reading for our full preview and matchups to watch for in this one.

Cleveland Browns vs Atlanta Falcons: What you need to know

Despite going undrafted, Feleipe Franks had a chance to beat out AJ McCarron for the No. 2 spot on the depth chart behind Matt Ryan even before McCarron went down with a season-ending injury. However, former first-round pick Josh Rosen just signed with Atlanta, so he’ll be trying to get up to speed with the playbook in time to play.

Meanwhile, the Browns will play Baker Mayfield some, and Case Keenum may see snaps, too. Third-stringer Kyle Lauletta has the most at stake, though, because Cleveland could very well proceed with only two quarterbacks on the 53-man roster. This is another shot for Lauletta to prove he deserves better than mere practice squad duty. 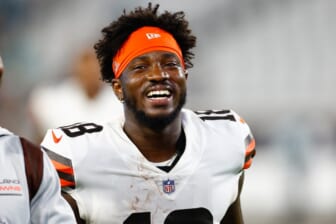 Since we haven’t really seen him in action yet, it’s safe to assume rookie No. 4 overall pick Kyle Pitts won’t be on the field for the Falcons. The phenomenal young tight end should be protected at all costs, which means another former first-round draft choice at the position, Hayden Hurst, ought to get plenty of work for the home team.

Hurst is going to be facing a Cleveland linebacker corps that, despite injuries of late, is still much deeper and better than last year. Jeremiah Owusu-Koramoah was a consensus first-round talent who fell to Round 2, and he’s legitimately fighting for a starting spot. However, he suffered a forehead gash on a weightlifting accident, and he’s been ruled out.

It’s not like reigning Coach of the Year Kevin Stefanski is resting on any laurels for the Browns. He’s got Cleveland weathering injury adversity without much issue leading up to the season. He’s being smart about resting certain key players. Everything is so organized. Who would’ve thought the Browns would be like this a few years ago?

The learning curve as a first-time NFL head coach is something Stefanski went through last year amid unimaginable circumstances. Arthur Smith is weathering that storm now, following a successful stint as Tennessee Titans offensive coordinator.

The bottom line: Even the Browns’ backup defenders could push a lot of Falcons for their starting jobs. Plus, Cleveland’s second-unit offensive line has performed well in game situations. All this seems to point to a victory for the visitors.