The Browns quarterback is planning on playing Thursday night when the Denver Broncos come to Cleveland for a battle of 3-3 teams.

Mayfield aggravated the labrum injury in his non-throwing shoulder Sunday during the Browns’ 37-14 loss to the Arizona Cardinals. Due to the short week, there are no shortage of observers expressing Mayfield might be better off letting the shoulder heal.

But Mayfield made it clear Tuesday that he — and only he — decides if he will be on the field.

“I have to make that decision,” Mayfield said. “Only I know how my body feels. If anyone questions whether I’m hurting the team and going out there injured, that’s not right. It’s my decision. I get to say whether I’m able to play or not.”

Mayfield was a limited practice participant on Tuesday. He has passed for 1,474 yards, six touchdowns and three interceptions this season.

Even if Mayfield does take the field Thursday, he won’t have star running back Nick Chubb (523 rushing yards) or sidekick Kareem Hunt (361) in the backfield with him.

Chubb will miss his second straight game due to a calf injury. Hunt was placed on injured reserve Tuesday with his own calf injury sustained against the Cardinals.

D’Ernest Johnson will be Cleveland’s starting running back. The third-year pro has carried three times for 11 yards this season and 40 times for 198 yards in 38 career games.

“It’s a next-man-up mentality,” Johnson said. “We just have to go out there and just execute. The mentality stays the same, and the standard is still high in the room.”

The Browns have dropped their past two games. Despite having NFL sack leader Myles Garrett (eight sacks) on the defense, Cleveland allowed a total of 84 points in the setbacks.

Denver has dropped three straight games, including a 34-24 home loss to the Las Vegas Raiders on Sunday.

The Broncos also have their own banged-up quarterback in Teddy Bridgewater, who is dealing with a foot injury. Bridgewater said the foot was stepped on during Sunday’s game.

Bridgewater was limited in practice on Tuesday. He said he is hopeful of playing, though coach Vic Fangio feels Wednesday might be the day that determines if Bridgewater will be ready for gameday.

“Teddy is a veteran, and he’s a good guy to talk to as to how he’s feeling,” Fangio said. “He’ll give you a straight and honest answer.”

Bridgewater, who has passed for 1,514 yards, 10 touchdowns and four interceptions, said playing hurt is part of the terrain during a short week.

The Broncos are weighing whether to activate wideout Jerry Jeudy (ankle) off IR. He has been sidelined since being hurt in Week 1 against the New York Giants, and Fangio said Jeudy has less than a 50 percent chance of playing Thursday.

Denver has dominated the series with 12 wins in the past 13 meetings, including six straight triumphs in Cleveland. 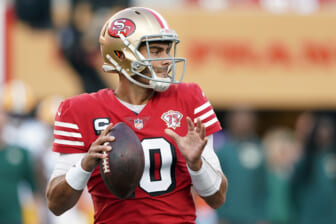