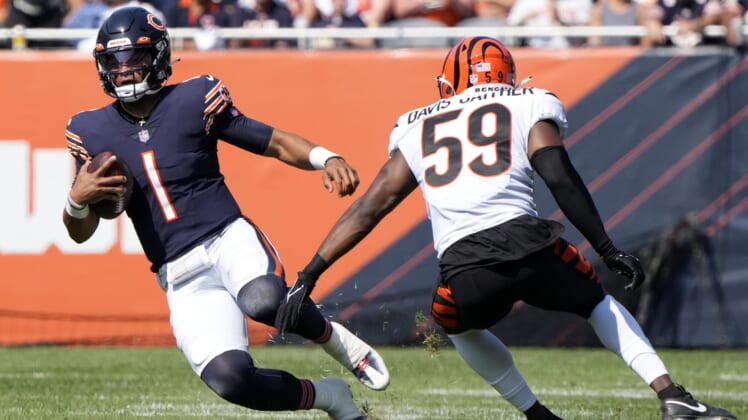 A knee injury to No. 1 signal-caller Andy Dalton opened the door for the 22-year-old Fields to step into the starting role for Chicago (1-1). Fields took over during the first half last week and helped guide the Bears to a 20-17 home win against the Cincinnati Bengals.

The Ohio State product is eager to do everything he can to help his team.

“I think I’m ready,” Fields said. “I’ve been preparing for this moment for a long time.

“My mindset doesn’t change. I’m still going to have to play my football and prepare the best I can — get a lot of practice reps and study, study, study and get more comfortable and confident with the plays and stuff like that.”

It will be a tough challenge against Cleveland (1-1), which also is looking for its second win in a row after posting a 31-21 victory over the Houston Texans at home in Week 2. The Browns have averaged 30 points a game behind a high-powered offense led by quarterback Baker Mayfield.

In two games this season, Mayfield has completed a whopping 81.6 percent of his passes for 534 yards, one touchdown and two interceptions. He also has rushed for a touchdown.

But while Mayfield and the Browns’ offense has surged, the defense has stumbled. That is why consistency on defense is a focus area for coach Kevin Stefanski and his staff.

“I think certainly with young players, you are going to have some growing pains — offense, defense and special teams,” Stefanski said. “Listen, we want to make sure that we are playing good, sound, defensive football. We have done that a bunch of moments, and then there are some moments that we just have to clean up. We recognize that, and the players and coaches are working hard to make sure that we get better as the season goes on.”

Cleveland is 9-7 against Chicago in series history. This is the first showdown since 2017, when the Bears pulled away for a 20-3 win at home.

Browns vs Bears: Rookie has chance to prove himself

The Bears traded up in the first round to select Fields at No. 11 overall. He has completed 53.3 percent of his passes for 70 yards, zero touchdowns and one interception during limited duty in his first two contests. He also has rushed 11 times for 34 yards and a score.

Fields acknowledged the hard work that went into creating a chance for his first NFL start.

“It means a lot,” he said. “If you told me seven, eight years ago that I’d be in this position, I probably wouldn’t believe you. But as time went along, I got more comfortable, and I guess my goals kind of got bigger and bigger.

“Around this time last year, I had an idea I could be in this position right now. So actually seeing myself in this position, being able to start on Sunday, it’s amazing.”