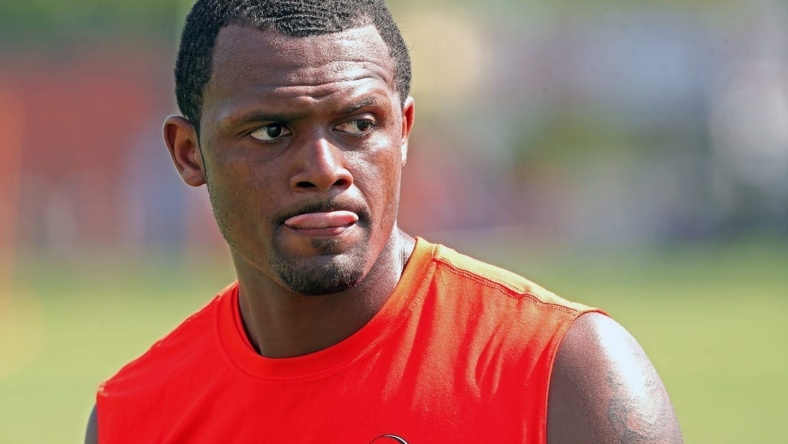 Quarterback Deshaun Watson is back with the Cleveland Browns, participating in practice and meetings at the team facility for the first time since the start of the regular season.

The next full-squad session is Wednesday in Berea, Ohio, but Watson is expected to be working overtime to get ready for the Dec. 4 game at Houston.

Watson’s 11-game suspension runs through Week 12 — including the bye week — before the ban is lifted just in time for his debut with the Browns against the Texans.

Watson was acquired from the Texans in March and signed to a $250 million contract. But he was banned for 11 games in August for violating the league’s personal conduct policy, when the NFL ruled his behavior with massage therapists was “egregious” and “predatory.”

Watson agreed to a $5 million fine and the 11-game suspension and vowed to undergo counseling and treatment.

Since the ruling, Watson was mostly away from the team. He was cleared to attend meetings and use the weight room facilities last month.

Head coach Kevin Stefanski said Watson would primarily be working in individual drills but would take some reps with the offense as his return nears.

Cleveland lost to the Miami Dolphins on Sunday and is 3-6, well out of the current AFC playoff picture with eight regular-season games to go.

Jacoby Brissett has been the starting quarterback in Watson’s place, but Stefanski said Watson is the starter Dec. 4 at Houston barring an injury.