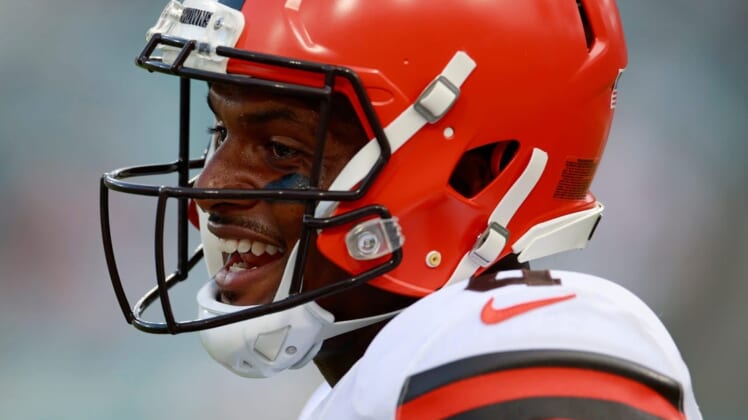 Watson, represented by the NFLPA, and the NFL settled on the punishment after the league appealed an initial six-game suspension that was rendered from an investigation into the allegations.

The initial suspension was handed down by former U.S. district Judge Sue L. Robinson, picked by the league and the NFLPA as an independent disciplinary officer.

With the Browns having a bye in Week 9, they will be without Watson until at least Week 13 in December — when Cleveland travels to play his former team in Houston.

Veteran journeyman Jacoby Brissett is slated to start in Watson’s place until then.

That figures to make reaching the playoffs in the highly competitive AFC a real challenge, much less playing in the Super Bowl.

In the Browns’ 24-13 preseason victory over Jacksonville last week, Watson completed just one of his five pass attempts for 7 yards.

Watson, 26, said in a press conference following the NFL announcement on Thursday that he was ready to move forward with his career.

“I’ve always been able to stand on my innocence and always said I never assaulted or disrespected anyone,” Watson said Thursday. “But at the same point I have to continue to push forward with my life and career.”

Cleveland acquired Watson from Houston over the offseason and signed him to a five-year, $230 million contract.

“I’m grateful that the disciplinary process has ended and extremely appreciative of the tremendous support I have received throughout my short time with the Browns organization,” Watson said in a statement. “I apologize once again for any pain this situation has caused. I take accountability for the decisions I made.

“My focus going forward is on working to become the best version of myself on and off the field and supporting my teammates however possible while I’m away from the team. I’m excited about what the future holds for me in Cleveland.”