Browns players to be joined by police, military and firefighters for national anthem 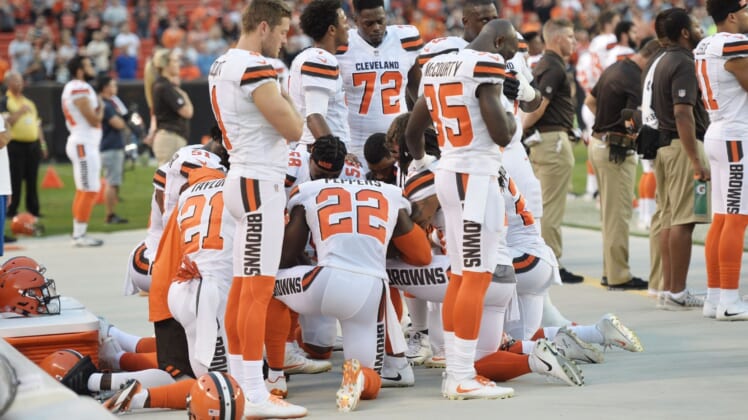 In a huge change of course, the Cleveland Browns will be joined by police, military and firefighters for the national anthem in Week 1. Previously, police had said they would not participate in the anthem due to Browns players kneeling in protest (more on that here).

After the Browns asked to sit down and talk it out, the Cleveland Police Department has joined forces with the organization to address the issues in a cohesive way, per ESPN’s Pat McManamon. According to the report, a video will play before the national anthem “that expresses solidarity with the community, and the importance of diversity and equality.”

Players will be joined by police officers, firefighters, EMTs and members of the U.S. armed forces, who will stand with them. Additionally, the players asked their owners, the Haslams, to join them.

This isn’t the only measure being taken, either. McManamon reports the players talked to police about developing a “neighborhood plan,” which would be designed to “create dialogue within and to help communities.” They also have discussed doing ride-alongs with police, among other things like hosting town hall meetings with police to “discuss relations between the police and the community.”

“It means that people are willing to sit down and work together to come up with actual solutions rather than just talking about what’s wrong and who’s at fault,” police chief Calvin Williams said. “That’s what the Browns have come to the table and said: ‘We want to be able to talk to folks and start a dialogue.’ “Which is kind of what … if you want to call it a protest .. or what their prayer was about — to start a dialogue to start to talk about some of these issues and try to come up with solutions.”

According to the report, Browns players are responsible for leading this cooperative approach. Following the final preseason game in which many player knelt together, players approached Jimmy and Dee Haslam to discuss the issue. Chris Kirksy, Jamie Collins, Seth DeValve, Randall Telfer, Ibraheim Campbell, Jamar Taylor and Ricardo Lewis were involved in the conversation with the owners.

“We want to unify and not create a disconnect between us and our fans or anyone else watching the games,” Telfer said. “We don’t mean any disrespect toward the flag, the national anthem, law enforcement or any civil servant. We have a clear vision of what we hope this nation and this community can be like. Those are the steps we’re taking.”

These are tremendous steps in the right direction. Much like we saw when Colin Kaepernick began this movement, the simple act of protest isn’t going to solve anything by itself. Working together, talking about the divisive issues that are still prevalent in many communities in America and finding out ways to make things better will do far more in the long run.