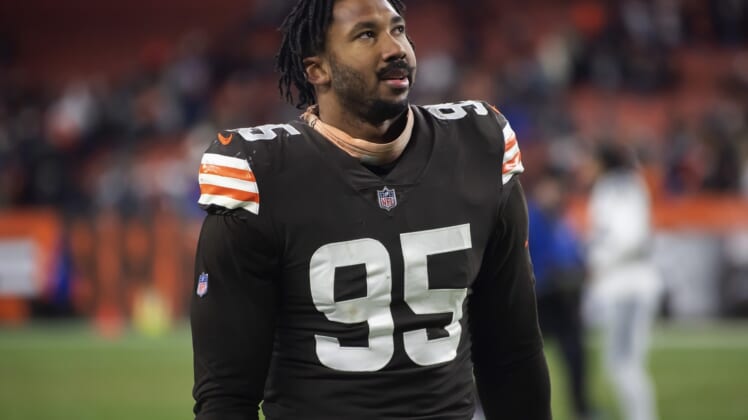 Cleveland Browns star defensive end Myles Garrett was listed as questionable to face the host Green Bay Packers on Saturday despite failing to practice this week.

Garrett is nursing a groin injury sustained in Cleveland’s 16-14 loss to the Las Vegas Raiders on Monday.

“He wants to play very badly but we’ll see how it goes over the next couple days,” Browns coach Kevin Stefanski said of Garrett, whose 15 sacks trail only Pittsburgh’s T.J. Watt (17.5) and Chicago’s Robert Quinn (16) for the NFL lead.

Cleveland defensive tackle Malik Jackson (knee) also was listed as questionable despite being limited in practice on Thursday.

Safety John Johnson III (hamstring) has been ruled out for the Browns (7-7), while center JC Tretter was placed on the reserve/COVID-19 list on Thursday.

Green Bay wide receiver Equanimeous St. Brown (concussion) was a full participant in Thursday’s practice and is expected to be available to play against Cleveland.

Star quarterback Aaron Rodgers (toe) and running back Aaron Jones (knee) did not receive an injury designation by the Packers (11-3).