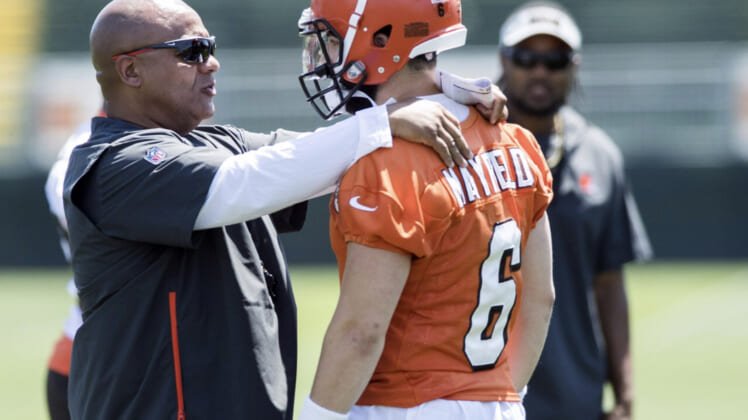 Cleveland Browns quarterback Baker Mayfield is not backing away from his criticism of former head coach Hue Jackson.

Following his team’s win over the Bengals on Sunday, Mayfield opened up about how he felt regarding Jackson’s decision to join the Bengals after being fired from Cleveland.

He later expanded on said sentiments.

Now, days after the win over Cleveland, Mayfield still isn’t backing down.

“I didn’t like the move… and people don’t have to care. I’m not looking for anybody’s approval.” Amen. https://t.co/TVuUMuQDJQ

Mayfield also made sure the media and fans know that we’re not privy to what happened behind the scenes with Jackson prior to his departure to Cincinnati.

#Browns QB Baker Mayfield on calling Hue "fake": "There's things that happened inside the building, there's no reason to go into detail about it. We've moved on."

The rookie has always been a boisterous individual. That’s not going to change simply because he’s under a microscope in Cleveland.

What we do know is that the reigning Heisman winner is better off without Jackson in his ear.

Cleveland has won each of the past two games under interim head coach Gregg Williams with Mayfield accounting for seven touchdowns compared to zero interceptions. That’s what counts, not some drama between the quarterback and his former head coach.