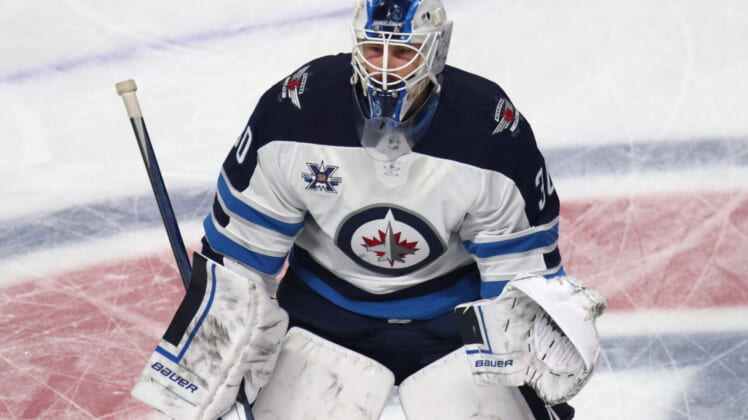 Jun 6, 2021; Montreal, Quebec, CAN; Winnipeg Jets goaltender Laurent Brossoit (30) during the warm-up session before the game three against Montreal Canadiens of the second round of the 2021 Stanley Cup Playoffs at Bell Centre. Mandatory Credit: Jean-Yves Ahern-USA TODAY Sports

The Vegas Golden Knights defeated the Los Angeles Kings 4-0 in a preseason game on Friday night. New goalie Laurent Brossoit keys Golden Knights win at home as he stopped every single one of the 38 shots he faced and recorded his first shutout in a Golden Knights jersey, though it still is only preseason.

The lineup the Golden Knights iced was a mix of surefire NHLers alongside some younger players that still have more developing to do before they reach the big league. Mark Stone was absent once again after being hit by a puck in an earlier preseason game, however it’s more of a precautionary measure than anything.

The goalscorers for the Golden Knights included William Karlsson, Alec Martinez and Daniil Miromanov, who managed to light the lamp twice. It was an impressive performance from the team and a good sign of things to come. With these preseason games acting as a warm-up for the regular season, Friday’s game served its purpose.

The Golden Knights did have a bit of a shaky start but managed to build a lead despite being outplayed. From there, they improved their play and started to control a larger share of the game flow, eventually putting a few more pucks past the Kings’ goalie Cal Petersen.

The Golden Knights announced they had sent more players to their AHL affiliate, the Henderson Silver Knights. Some of the players who were sent down were Kaeden Korzack, Miromanov and Paul Cotter. In total there were more than 20 players that were reassigned.

The team is expected to continue to make cuts as they prepare for their first regular-season game against the Seattle Kraken on Oct.12. That game will be a battle between the two most recent expansion teams that have joined the NHL.

Despite being reassigned to the Silver Knights earlier today, Miromanov has had an impressive preseason. He scored twice yesterday and once in the game before, displaying that he has a nose for the net and ensuring that the Golden Knights will give him a long look in the future.

Brossoit also had a great start and sparked hope that the new goaltending duo will lessen the blow of Marc-Andre Fleury’s departure. Brossoit will be relied upon this season to start his fair share of games and tonight was an encouraging start.