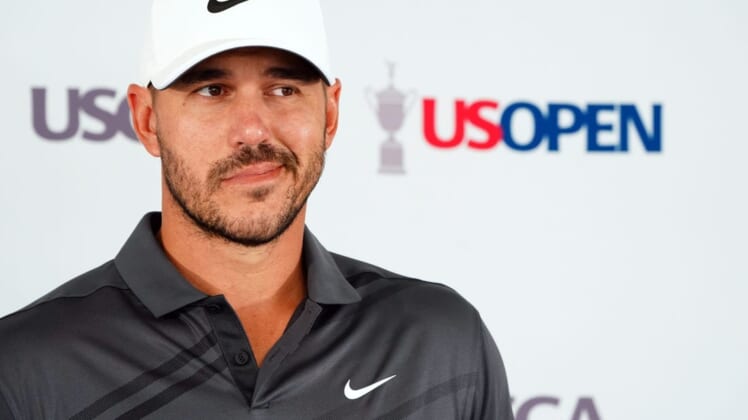 Many observers believe Brooks Koepka is a natural target for the upstart LIV Golf International Series.

The former Florida State star toiled on the international circuit before developing into the No. 1 player in the world and a four-time major champion. Now 32, Koepka has been dealing with knee issues for the past few years and is recently married as his golf schedule has increasingly dwindled.

However, Koepka bristled at questions about LIV Golf on Tuesday as he focuses on teeing off in the U.S. Open on Thursday. Asked whether his decision to stay on the PGA Tour is permanent, Koepka declined to discuss anything about his golf future beyond this week.

“There’s been no other option to this point. So, where else you going to go?” he said.

When a reporter responded with, “LIV?,” Koepka again redirected the topic back to the third major of 2022.

“I think it kinda sucks,” he said. “Y’all are throwing a black cloud over the U.S. Open. It’s one of my favorite events — I don’t know why you guys keep doing that.”

Koepka is one of only seven players to win back-to-back U.S. Opens and owns one of the most impressive resumes in the history of the country’s national open. However, he has fallen to 19th in the Official World Golf Ranking while playing only four times since missing the cut at The Players Championship in March.

Koepka isn’t among the pre-tournament favorites as he is being offered at +4000 by BetMGM and DraftKings.

The Saudi Arabian-backed LIV Golf is offering massive amounts of guaranteed money — reportedly more than $200 million to Phil Mickelson and $125 million to Dustin Johnson alone — along with a limited schedule that includes only eight events during its inaugural year.

While Koepka declined to fall into the trap of pledging his allegiance to the PGA Tour — a la Johnson and Bryson DeChambeau in February — he said the prospect of a limited schedule wasn’t a particular draw toward LIV.

“I can come out here and play a little weeks as I want,” he said of the PGA Tour. “I choose my own schedule regardless of what tour I play. I’ve played what, the Match Play, Augusta, PGA (Championship) and this one?

Koepka reiterated on Tuesday that he prefers the big events and has little motivation in having to shoot four rounds in the low 60s to compete in many regular PGA Tour stops. But whether he will ultimately join his brother, Chase, on the LIV Golf series will remain an unanswered question for at least another week.

“Obviously, LIV’s trying to make a big push for golf,” Koepka said. “I love my brother. I support him in everything he does. He’s family. I’ll always love him and support him.

“So, whatever he does, I’m cheering for him.”