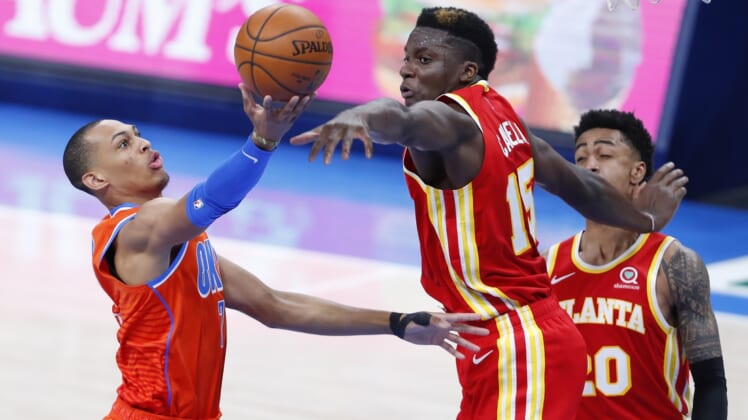 General manager Sean Marks has turned the team into a legit NBA title contender. This has Brooklyn Nets trade rumors suggesting that the front office head could make another big move or two ahead of the NBA trade deadline after acquiring James Harden.

Brooklyn might not have the assets or cap room to pull off a major blockbuster deal. But it does have the injured Spencer Dinwiddie to entice rebuilding teams. He averaged over 20 points per game a season ago and is firmly on the trade block.

Below, we look at four Brooklyn Nets trade scenarios ahead of the March 25 NBA trade deadline.

Pretty much in and out of the Kings’ rotation thus far this season, Bjelica is of interest to multiple contenders on the NBA trade market. For good season. The 32-year-old stretch four from Serbia is shooting 41% from distance since the start of the 2017-18 campaign. That would certainly come in handy for the Nets. Meanwhile, they are also able to add a veteran big man in Holmes who is averaging 13.0 points and 8.2 rebounds to team up with DeAndre Jordan.

As for the Kings, taking a chance on Dinwiddie would be all about adding flexibility moving forward. He has a $12.3 million player option for next season. Coming off a torn ACL, there’s a decent chance the guard will exercise it. Sacramento could opt to either move him or Buddy Hield during the summer with De’Aaron Fox and Tyrese Haliburton starring this season. Claxton is also a nice young asset to have in the frontcourt.

This is likely one of the smaller moves we can expect the Nets to make ahead of the March 25 NBA trade deadline. McGee is going to be a hot commodity on the block. As a pending free agent, he’s also likely not going to cost too much. The 33-year-old McGee have morphed into a reliable veteran. He’s averaging 7.5 points and 4.8 rebounds on a healthy 61% shooting from the field since the start of the 2016-17 season. The big man would act as an immediate shot in the arm off the bench behind DeAndre Jordan.

There’s also no reason to believe that Cleveland would turn down this Nets trade offer. Claxton would make sense as a young big to help build this team from rebuilding status. The 21-year-old former first-round pick has shown flashes in limited playing time throughout his career, averaging 5.3 points in less than 13 minutes of action.

After firing head coach Lloyd Pierce following a disastrous 14-20 start to the season, there’s every reason to believe Hawks general manager Travis Schlenk will shake things up ahead of the NBA trade deadline. That could very well include moving off veteran center Clint Capela. They have younger bigs in Onyeka Okongwu and John Collins itching for more play.

In this hypothetical trade scenario, Atlanta adds a starter-caliber guard to team up with Trae Young in Dindwiddie as well as young big man Nicolas Claxton. As for the Nets, they actually acquire a center that might take over the starting duties from Jordan. Capela is averaging 14.9 points and 14.1 rebounds on the season. He would be the one missing piece.

Yet another potential Nets trade that would fly under the radar, this would be all about Sean Marks and Co. building up depth after losing that following the James Harden blockbuster. Plumlee continues to act as a solid force at center, averaging 10.3 points and 9.0 rebounds in his first season with the Pistons. Meanwhile, Ellington would provide Brooklyn with more depth in the backcourt.

Now, why would Detroit do this? It’s rather simple. New front office head Troy Weaver is trying to find a young core to build with moving forward. At the very least, Dinwiddie would provide Detroit with flexibility in the backcourt after it moved off Derrick Rose earlier this offseason. Heck, he might fit into the team’s long-term plans given what we’ve seen from the veteran guard over the past couple seasons in the Big Apple.