With Brooklyn Nets star point guard Kyrie Irving still being held out of action due to his vaccination status, everyone’s waiting for the other shoe to drop. What’s eventually going to be the solution with Irving in Brooklyn?

In the video, Woj mentions the Brooklyn Nets have started taking some incoming calls from teams looking to trade for Kyrie Irving.

He also stated the Nets have not been the ones trying to trade Irving away, rather other franchises in the Association are interested in gauging general manager Sean Marks’ interest in dealing the star point guard who has yet to play a game this season. 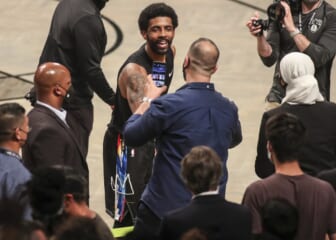 Perhaps more interestingly, Woj reveals the nugget that Philadelphia 76ers general manager Daryl Morey has called all around the league, looking for another impact player to acquire by trading Simmons, who has been doing his damnedest to get a trade. However, when making those calls, Morey has not called the Nets GM about a Simmons for Irving trade.

In the search for a star in any trade of Simmons, it’s a bit peculiar that Morey hasn’t at least inquired about a potential Simmons for Irving trade. Instead, Morey has ridiculously mentioned this Simmons trade process could take up to four years to resolve itself.

As both sides continue playing hardball, this could be a long season in both Brooklyn and Philadelphia. But maybe Morey should give Sean Marks a call? It can’t hurt.