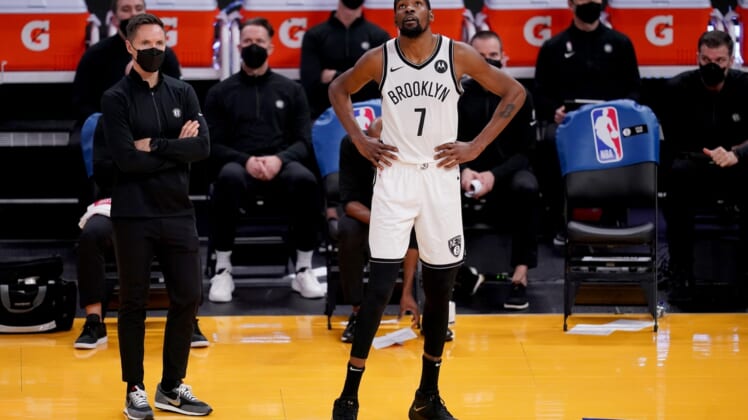 The new-look Brooklyn Nets continue to have a tough time getting their shiny trip of stars on the same court.

Kevin Durant will miss his third consecutive game when the Brooklyn Nets visit the Los Angeles Lakers on Thursday as he continues to battle a strained left hamstring, the team announced Wednesday.

The 10-time All-Star already missed road games against the Sacramento Kings on Monday and the Phoenix Suns on Tuesday, both Brooklyn victories — after playing on Saturday in a road win over the Golden State Warriors. Coming off a week-long break while under the NBA’s health and safety protocol, Durant scored 20 points in 33 minutes against the Warriors.

The Nets initially said Sunday that Durant would miss “at least” the next two games with the injury. The team characterized the injury as mild.

Brooklyn also announced Wednesday that six-time All-Star Kyrie Irving — who sat out Tuesday against the Suns because of back tightness — is probable to face the Lakers.

The Nets have put their vaunted trio of Durant, Irving and eight-time All-Star James Harden together for seven games this season since the mid-January deal to acquired Harden from the Houston Rockets.

Durant has appeared in only 19 of the Nets’ 30 games this season, and Brooklyn is 4-3 without Durant since trading for Harden last month.

Durant is averaging 29 points, 7.3 rebounds and 5.3 assists per game this season after missing all of 2019-20 due to recovery from a torn Achilles tendon sustained in Game 5 of the 2019 NBA Finals.