The Brooklyn Nets are in the midst of a potential championship run, but how long can they keep their star-studded squad together beyond the 2021 NBA playoffs?

Kevin Durant, James Harden and Kyrie Irving are due to cost more than $121 million combined next season, and all have player options in their contracts for the year after that. It’s possible this Big Three will stick together, but there’s a real chance one of them will split off after chasing a couple rings.

Preceding all of that, this Nets offseason will be vital to shaping the course of the franchise’s future. Let’s take a look at some Nets rumors, potential trade scenarios and free-agent targets for this summer.

A couple soon-to-be free agents who were reportedly on the Nets’ radar around the NBA trade deadline were versatile forward P.J. Tucker and 3-point marksman J.J. Redick, who wanted to be in New York but ultimately got sent to Dallas from New Orleans.

Redick is the type of steady, experienced leader who could do wonders for balancing all the egos in the locker room. He dealt with a similar situation on the Philadelphia 76ers, when they had himself, Ben Simmons, Joel Embiid and Jimmy Butler. That core was a Game 7 Kawhi Leonard buzzer beater away from potentially making a Finals run.

As for Tucker, he’s a gritty, hard-nosed defender and can rebound exceptionally well for his size. That’s something Brooklyn needs, and Tucker is an expert corner-3 shooter who’d fit nicely into the Nets’ high-octane offense as well.

Provided he elects to continue playing — and at this point there’s no indication he’ll stop — Redick is liable to sign with either New York squad. His best chance at a first NBA title is clearly in Brooklyn.

It’ll be interesting to see how Tucker approaches free agency, because he’s proven to be valuable player for the Milwaukee Bucks down the stretch.

Could Kyrie Irving be first Big Three domino to fall?

This is entirely speculative, but based on Irving’s contentious relationship with the media and tendency to stir controversy, if anyone is bound to be on the block, it’s the Nets’ most mercurial personality.

It seems like when Durant does his whole relentless trash-talking routine on social media that he’s liable to combust at any minute. Instead, he continues to produce at an elite level, and overall, has performed remarkably well off a torn Achilles, which could’ve caused a significant, sudden decline.

After Harden forced a trade from the Houston Rockets, he wasn’t exactly winning in the court of public opinion. But since hitting the hardwood in Brooklyn, The Beard has been all-business and a model teammate. He’s made absolutely no waves and is playing some of the most efficient basketball of his career. 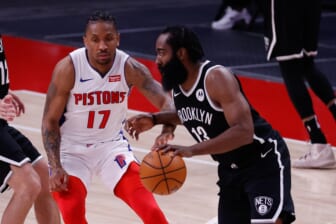 Irving is an entirely different matter. He’s a total wild card who’s flamed out with multiple other teams. It wouldn’t be a shock to see the Nets try to flip him for one or two proven players, or some kind of huge draft haul.

All that may go out the window if Brooklyn wins it all in the NBA Finals. Then again, it depends on how all that goes down. As the pressure increases deeper into the postseason, the potential for Irving to erupt grows.

Harden and Durant have a history that dates back to staring their NBA careers with the Oklahoma City Thunder. it’s been a fruitful reunion for them, and that shared experience makes it all the more likely Irving is the one traded among this epic triumvirate, if anyone is.

It’s no secret the Nets lack size and rebounding prowess. They acquired buyout stars in LaMarcus Aldridge and Blake Griffin after the trade deadline, but Aldridge unfortunately had to retire due to a heart condition. Griffin is just a patchwork, quick fix right now.

The only real trade-worthy assets the Nets have are wing sharpshooter Joe Harris and veteran big man DeAndre Jordan. It’s unclear whether any team would be willing to take on Jordan’s contract if he and Harris were packaged together, and Jordan may still have enough in the tank to be serviceable.

Also, Brooklyn doesn’t have much draft capital to offer due to the huge Harden trade, so would a suitor actually be tempted to take Harris alone? Probably not. It’d cost other young, cheap role players who give the Nets’ top-heavy squad key depth.

One scenario that does work on TradeNBA.com’s trade machine is dealing Harris and Jordan to the Dallas Mavericks in exchange for Kristaps Porzingis. The salaries work and everything.

Porzingis is injury-prone, but imagine him returning to the Big Apple to stick it to the New York Knicks. That’d be quite a juicy scenario, and he’d provide the size, rebounding, defensive upside and spacing Brooklyn really needs.

Other potential targets for the Nets are Indiana Pacers stars Myles Turner and Domantas Sabonis.

The reality is, the Nets don’t have the money to spend in free agency on another star. There are some decent veterans who can fit what they’re lacking right now, though, and their mid-level exception could be an appealing short-term offer to players on the open market who want a crack at a championship.

With that in mind, here are some solid players Brooklyn could pursue this offseason, all of whom are unrestricted free agents: