Nov 21, 2018; Dallas, TX, USA; A view of the team logo on the shorts of Brooklyn Nets forward Jared Dudley (6) as he warms up before the game against the Dallas Mavericks at the American Airlines Center. Mandatory Credit: Jerome Miron-USA TODAY Sports

The Brooklyn Nets could be looking to catch some rays and waves in training camp this year. Per a report from SB Nation, the Nets will be holding training camp in San Diego.

Owner Joe Tsai resides in San Diego, so the move would make sense on that level. The Nets also already have a preseason game scheduled with the Los Angeles Lakers in the Staples Center Oct. 3, which would be a convenient trip along the California coast.

The Nets wouldn’t be the first NBA team to hold offseason workouts in San Diego. Several teams, including the Denver Nuggets (2018), Golden State Warriors (2004) and Los Angeles Lakers (2004), have all made the trek over the last two decades. 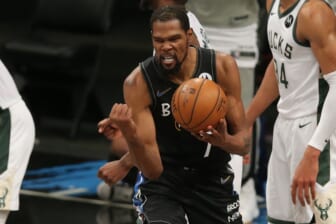