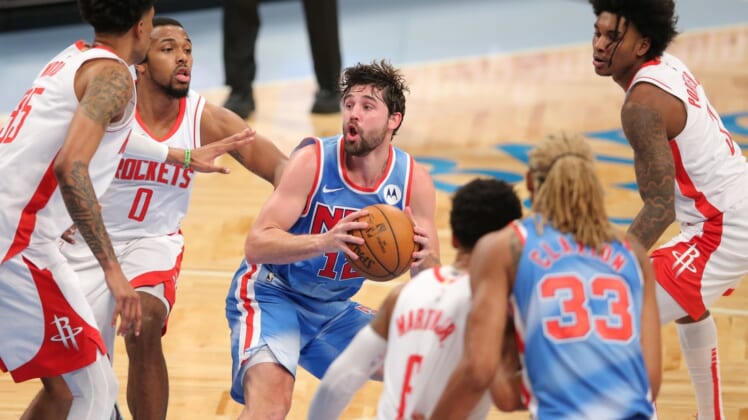 Kyrie Irving collected 31 points and a season-high 12 assists as the Brooklyn Nets rallied in the fourth quarter to beat the Houston Rockets 120-108 Wednesday night in New York.

Joe Harris added 14 of his 28 points in the fourth period and hit seven 3-pointers as the Nets moved into first place in the Eastern Conference and improved to 19-3 since Feb. 10.

The news wasn’t all good for Brooklyn, though, as James Harden left the game due to right hamstring tightness. Harden scored 17 points before exiting with 4:48 remaining in the third quarter as the Nets were starting to rally.

After holding on for a five-point win over the league-worst Minnesota Timberwolves on Monday, Brooklyn started slowly Wednesday. The Nets did not take their first lead until late in the third quarter, and they trailed throughout the first six minutes of the fourth.

Irving shot 12 of 25 from the floor. Nicolas Claxton added 12 points and eight rebounds for the Nets, who shot 48.9 percent from the field and overcame an 18-point deficit. Brooklyn newcomer Blake Griffin hit two 3-pointers in the game-ending run and finished with 11 points.

Kevin Porter Jr. scored 20 points for the Rockets, who blew a double-digit lead for the third time in four games. Danuel House Jr. added 18 for Houston, which made 15 of its first 19 shots and sank 50 percent overall from the floor.

House scored 12 points and the Rockets held a 42-29 lead through the first quarter. Porter scored nine points in the second quarter and Houston held a 68-57 edge entering halftime.