Takeaways from Brooklyn Nets Game 1 victory over the Milwaukee Bucks 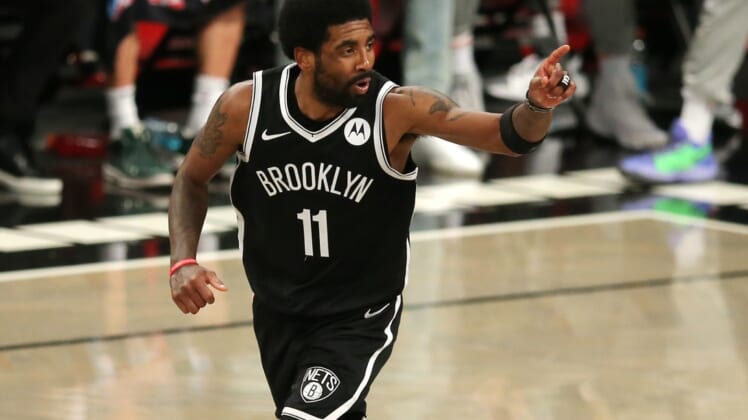 When Brooklyn Nets star James Harden left Game 1 with a right hamstring injury, many feared it could be a devastating blow that would change the course of the Eastern Conference Semifinals. Instead, a new “Big Three” emerged to propel the Nets to a victory.

Harden exited less than a minute into Saturday’s action and Brooklyn ruled him out from the game minutes later. Milwaukee suddenly had the advantage in arguably the most entertaining series of the NBA Playoffs, one where the winner would be the favorite to win the NBA Finals.

But just as they did when injuries struck during the regular season, Brooklyn’s players stepped up. Kyrie Irving and Kevin Durant proved why they are two of the best players in the NBA and Blake Griffin turned back the clock with a phenomenal performance.

Let’s dive into our takeaways from the Brooklyn Nets 115-107 victory over the Milwaukee Bucks.

Blake Griffin is in championship mode

When Brooklyn signed Griffin, expectations weren’t exactly high for the 32-year-old forward. Griffin’s time with the Detroit Pistons ended on a sour note, leading many to believe he was no longer capable of taking over a game. On Saturday night, he did just that.

Griffin finished the first half with 10 points, six rebounds and two steals. The box score was certainly impressive, but the veteran forward did the little things that swung this game. He couldn’t be stopped from beyond the arc, made countless hustle plays and found open teammates to help create for others. Even more surprising, Griffin made as many 3-pointers as the Bucks through three quarters.

We don’t know how long Harden will be sidelined and Milwaukee will make adjustments to Game 1, but Griffin’s performance put the NBA world on notice. After falling short so many times in his career, Griffin knows this might be his best shot at a ring.

It’s happening again. When the Bucks were sent home in the Eastern Conference Semifinals last year, Middleton was part of the problem. Outside of the team’s Game 4, the All-Star forward shot just 30.7 percent from beyond the arc, committed 13 turnovers and had 23 fouls. It cost the Bucks in that series and it might sink their title hopes again.

Middleton couldn’t buy a bucket in Game 1. He missed all five of his 3-point attempts and shot just26 percent from the field on 23 attempts. It’s not like he made up for it on the defensive end, failing to record a steal or a block and getting torched by Durant. A one-game dud would be one thing, but this seems to be a theme from Middleton against championship-caliber opponents in the playoffs.

This is the beauty of having three MVP-caliber talents in your starting lineup. When Harden went down, causing real concern in the Barclays Center, Durant and Irving stepped up. Game 1 easily could have gone in Milwaukee’s favor, but the Nets’ stars became playoff heroes once again.

Irving and Durant combined for 32 points in the first half, hitting 14-of-28 shots. When one was closely guarded, he would find the other to set up the easy bucket. Milwaukee had reason to worry about how it would contain three players capable of taking over a game. Saturday’s game showed they have reason for concern since they couldn’t even contain just two.

The Nets came into this series as the favorites, but Irving and Durant are both playing with a chip on their shoulder. Game 1 showed they can beat arguably their toughest competition and that bodes well for the Nets’ championship hopes. If Harden is sidelined for Game 2, Brooklyn can feel confident these two will deliver.