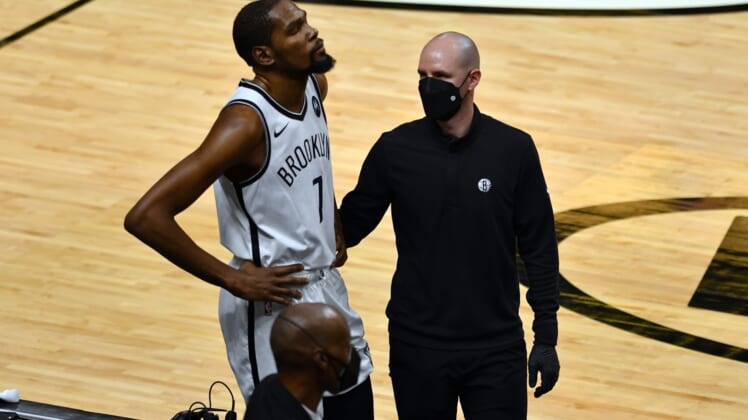 Apr 18, 2021; Miami, Florida, USA; Brooklyn Nets forward Kevin Durant (7) gets examined off the court during the first half of a game against the Miami Heat at American Airlines Arena. Mandatory Credit: Jim Rassol-USA TODAY Sports

Brooklyn Nets forward Kevin Durant will miss Tuesday’s game against the New Orleans Pelicans due to the left thigh contusion he suffered during Sunday’s loss to the Miami Heat.

The Nets haven’t yet revealed a timetable for how long Durant may be sidelined. Coach Steve Nash said after Sunday’s game that Durant would be re-evaluated on Monday.

Durant has played in just 24 of Brooklyn’s 57 games this season. He recently returned from a 23-game absence due to a hamstring injury.

Brooklyn also continues to be without star guard James Harden (hamstring), who will sit out for the seventh straight game.

Also, big men Nic Claxton and Reggie Perry will miss the contest due to health and safety protocols.