Nets forward Jeff Green will miss the rest of Brooklyn’s first-round playoff series against the Boston Celtics with a strained left plantar fascia.

Green left Brooklyn’s 130-108 Game 2 victory on Tuesday after playing 12 minutes with what was initially called a bruised left foot. He will be re-evaluated in 10 days and might be available for the next round of the playoffs should the Nets advance.

Brooklyn has a 2-0 lead in their series with the Celtics, which resumes Friday in Boston. Green, 34, averaged 4.5 points in the opening two games against the Celtics.

In 68 regular-season games in his first campaign with the Nets, Green averaged 11 points, 3.9 rebounds and 1.6 assists on 49.2 percent shooting from the floor, including 41.2 percent from three-point range. 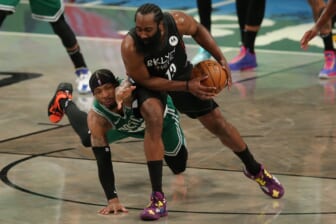 The fifth overall pick of the 2007 NBA Draft by the Celtics, Green was immediately traded to the then-Seattle SuperSonics and has played for 10 teams in his 13-year NBA career. In 976 career regular-season games, Green has averaged 12.8 rebounds, 4.4 rebounds and 1.6 assists while shooting 44.4 percent from the field and 34 percent from beyond the arc.