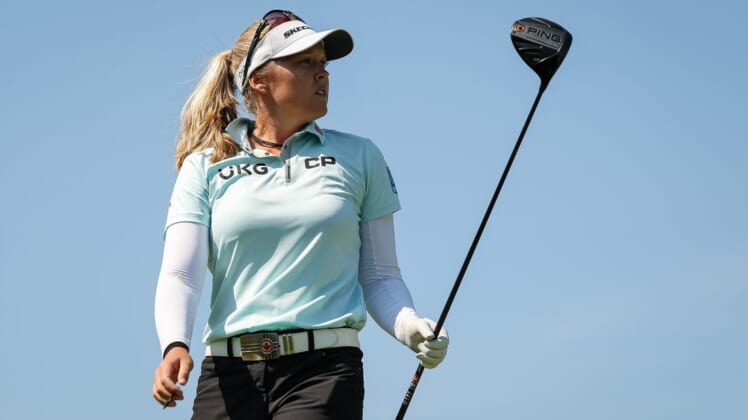 Canada’s Brooke Henderson maintained her lead on Saturday as she chases her second major title at the Evian Championship at Evian-Les-Bains, France.

Henderson carded a 3-under-par 68 in the third round to get to 17 under, two shots ahead of South Korea’s So Yeon Ryu and four ahead of American rookie Sophia Schubert in third place.

After firing back-to-back rounds of 64, Henderson stumbled Saturday with a bogey at the par-4 opening hole. She posted four birdies and 13 pars the rest of the way to hold off Ryu (65) and Schubert (66).

“It wasn’t as good as the first two days, but, yeah, really hung in there. Made some clutch par saves on back nine, which felt nice,” Henderson said. “Not as many birdies on the card. Felt like the course is playing a little bit tougher for me today. Hopefully go out tomorrow and continue to ball strike pretty well and hopefully make some putts.”

Henderson, 24, is looking for her first major victory since the 2016 Women’s PGA Championship.

Ryu, a two-time major winner, matched her best career round at this tournament (second round in 2012) with a round of eight birdies and two bogeys to get to 15 under. She built some momentum for Sunday with birdies at three of the last four holes.

“I’m a little bit nervous,” Ryu admitted. “But all I can do is focus on what I can do. I’m just going to do some light putting work today and then hopefully I can play well tomorrow as well.”

Schubert also finished strong with four straight birdies. Her only blemish was a double bogey at the par-3 fifth hole.

“I’ve worked so hard, worked hard to be at this point,” Schubert said. “I’m just trying not to think about it in a way. I mean, I get to play with some of the best golfers in the world and I think to myself that I deserve to be here. I’m just trying to keep my confidence up and just keep going.”

The five players tied for sixth at 11 under include Rolex Rankings No. 1 Jin Young Ko (67) of South Korea and No. 3 Nelly Korda (71). Korda began the day in solo second but offset four birdies with four bogeys.

Switzerland’s Albane Valenzuela got to 10 under with Saturday’s low round of 7-under-par 64.