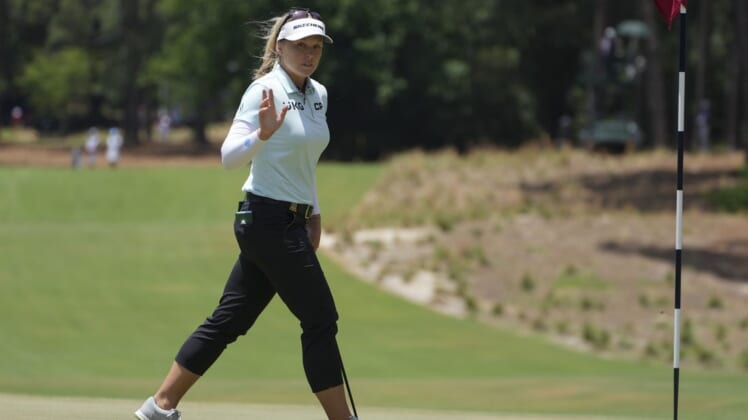 Henderson shot 7-under 64 on Sunday while earning her 11th career victory. Weaver-Wright fired a 65.

Henderson set up her victory with a stellar second shot on the playoff hole with the ball stopping about 6 feet from the hole. Weaver-Wright reached the green on her third shot and then missed a birdie putt before completing her par.

With two putts to win, Henderson needed just one as she knocked the short putt in the hole.

“With playoffs, you really only have one opportunity so I just tried to go out and hit really solid shots,” Henderson said afterward. “So to walk up that fairway and see that I only had a pretty short (putt) was a big relief. Just needing two putts to win was also really clutch.”

Henderson’s victory is her first since prevailing at the LA Open nearly 14 months ago.

“I’m just super excited,” Henderson said. “It felt like a long time since my 10th victory. I’ve been putting in some work.”

Henderson also had an eagle in regulation on the par-5 ninth hole. She also posted five birdies in a bogey-free round.

She received a ferocious fight from Weaver-Wright, a 28-year-old looking for her first LPGA victory.

Weaver-Wright scored six birdies, including four over the last six holes of her bogey-free round. She birdied Nos. 17 and 18 in order to force a playoff.

Jodi Ewart Shadoff eagled No. 18 to finish alone in third at 11 under. The Englishwoman also had four birdies and two bogeys while carding a 67.

Lydia Ko of New Zealand and Albane Valenzuela of Switzerland both shots 67s and finished tied for fourth at 10 under.

Lincicome is competing despite being six months pregnant.

“But to go and sit at home and not play, I felt like time was going to go by slower.”

Defending champion Celine Boutier of France fired a torrid 63 to move into a tie for ninth at 8 under. Joining her were Brittany Lang (67) and South Korea’s Jenny Shin (66).