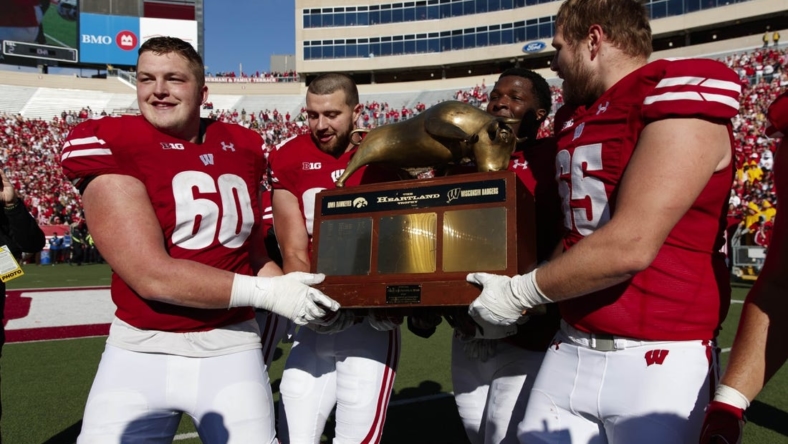 Resurgent Wisconsin and host Iowa will put two-game winning streaks on the line Saturday when the Heartland Trophy is up for grabs in Iowa City.

The winner will remain in the thick of the congested Big Ten West, with the Badgers angling to claim the bronze bull trophy for the sixth time in seven tries.

Iowa and Wisconsin are among a four-team logjam one game behind Illinois in the West Division after the Illini’s 23-15 loss at home against Michigan State.
Purdue and Minnesota also are 3-3 in the conference.

The Badgers improved to 3-1 under interim coach Jim Leonhard, promoted from defensive coordinator when Paul Chryst surprisingly was fired following a 34-10 loss at home to Illinois on Oct 1.

“I always loved playing at their place,” said Leonhard, a former Wisconsin and NFL player. “Great atmosphere. We know what they’re about, and they know what we’re about. It’s going to be a really exciting day.”

Wisconsin jumped to a 17-0 halftime lead against Maryland and held the Terps to 189 yards in total offense, 73 of which came on their only touchdown drive in the closing minutes. Maryland went into Madison averaging 454.4 yards per game.

Isaac Guerendo gained 114 yards on 12 carries, including a career-long 89-yard touchdown run, and Braelon Allen had 119 yards on 23 attempts as the Badgers piled up 278 yards on the ground in rainy, windy conditions that limited passing by both teams.

Allen is fourth in the Big Ten in rushing with 989 yards. Quarterback Graham Mertz, interception-prone in the Badgers’ losses, has nine touchdowns and one pick in his last four games.

Although last in the Big Ten in total offense, Iowa’s much-maligned attack has come alive the last two games. After averaging 227.3 yards in total offense through the first seven games, the Hawkeyes totaled 398 in a 33-13 win at Northwestern, followed by 376 yards against Purdue.

Freshman Kaleb Johnson carried 22 times for 200 yards and one touchdown against the Boilermakers, second most for a Hawkeyes freshman behind Marcus Coker’s 219 vs. Missouri in the 2010 Insight Bowl.

“After seeing the film, no question, I think it was our most complete football game as a team so far, so that was good to see,” Iowa coach Kirk Ferentz said of the Purdue game. “Offensively, we showed more growth, played with good balance.”

Iowa is third in the nation in fewest yards allowed with 264.4 per game and fifth in scoring defense at 14.3 points.

“Tremendous amount of respect for the way they play defense,” Leonhard said. “It’s very different from my philosophy and what we do and how we do it. So any time you’re kind of looking at the complete opposite side of the coin and watching a team just consistently dominate, you gain an appreciation for it.”

Wisconsin has won five of the last six games against the Hawkeyes, whose last victory in the series was 28-7 at Iowa City in 2020.