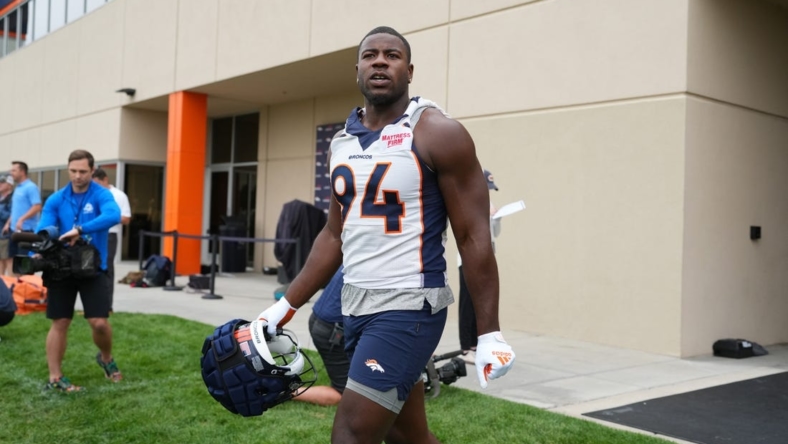 Denver Broncos linebacker Aaron Patrick is suing the NFL, the Los Angeles Chargers, the Los Angeles Rams and ESPN for negligence over a season-ending torn ACL he sustained during a game against the Chargers in Inglewood, Calif.

Patrick was defending against a punt return Oct. 17 at SoFi Stadium and went out of bounds. The lawsuit alleges that Patrick’s foot rolled on a mat that was covering television cords and cables used with the league’s replay monitor. He was trying to avoid slamming into an NFL employee involved with the monitor — whom he did collide with — just before his legs made contact with the mat.

Patrick said his knee bent awkwardly after his foot made contact with the mat.

The suit, filed in California by attorney William Berman, says “the defendants were negligent in their operations of SOFI STADIUM in allowing a dangerous condition to exist by having three mats placed near the sideline to cover cords/cables that led to the feed for the instant NFL’s replay monitor.”

Berman said that safety at SoFi Stadium wasn’t a priority of the NFL.

“Player safety should be the foremost of importance to the NFL and its owners,” Berman said. “The NFL is a multi-billion-dollar sports enterprise and business, and it needs to do everything possible to protect its players from non-contact game injuries.

“As for Patrick’s injuries, Sofi Stadium was built at a $5,000,000,000 expense; the stadium should have the state-of-the-art equipment to protect for player safety, and not use the type of $100 mats that you would expect to see in a restaurant kitchen.”

Patrick, 25, had a one-year, $660,000 contract for this season and reportedly lost the chance to hit bonus clauses in the deal. He played all but two snaps on special teams in five games this season and made three stops.

Overall, Patrick has 11 tackles in 17 games with Denver over the past two seasons.