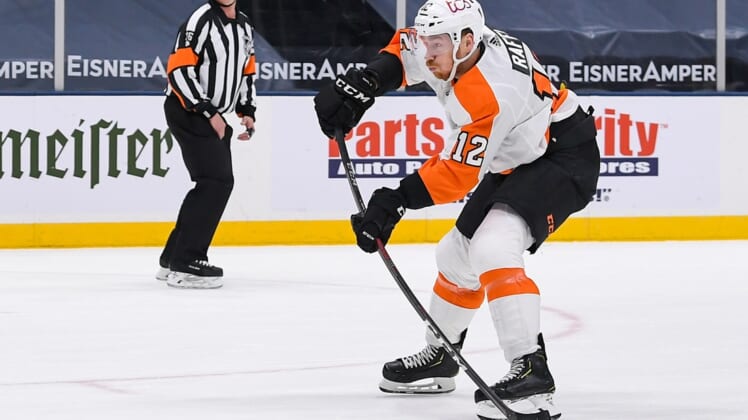 Brock Nelson scored the only goal of the shootout in the fifth round and Ilya Sorokin made five saves in the shootout as the New York Islanders edged the Philadelphia Flyers, 3-2, Thursday night at Nassau Coliseum in Uniondale, N.Y.

The Islanders moved two points ahead of Washington into first place in the East Division.

After Jordan Eberle, Anthony Beauvillier, Mathew Barzal and Josh Bailey were unable to score, Nelson sent a wrist shot went over goaltender Carter Hart’s stick and off the right post.

Sorokin made Nelson’s goal stand up when he made a right pad save on Joel Farabee. Sorokin also stopped Sean Couturier, Nolan Patrick, Claude Giroux and Travis Konecny in the first four rounds.

Nelson’s and Sorokin’s performance in the shootout occurred after the Islanders were unable to score on a power play in the final 1:58 of overtime.

The Islanders held a 2-0 lead 7:13 into the game when Nelson and Eberle scored 63 seconds apart.

Nicolas Aube-Kubel tallied in the first period and Jakub Voracek scored early in the second for the Flyers.

Sorokin finished with 25 saves as the Islanders won their fourth straight and improved to 17-1-2 at home.

Nelson got his 15th goal when he parked himself in the right circle and one-timed a pass from defenseman Ryan Pulock over a sprawling Hart.

About a minute later, Barzal pried the puck loose from Ivan Provorov along the right-wing boards and the puck went to Leo Komarov, who went behind the net, and found Eberle alone in the high slot.

Later in the period, a little over a minute after New York had a five-minute power play expire, the Flyers made it a one-goal game on a fluky goal by Aube-Kubel, whose wrist shot from the right circle hit the end of Sorokin’s stick, then deflected off the stick and into the net.

Voracek forged a 2-2 tie when he finished off a 2-on-1 with Giroux by lifting a wrist shot from above the right circle over Sorokin’s stick at 3:22 of the second.