Brock Holt singled in the winning run with two outs in the 11th inning and the Texas Rangers earned a split of their two-game interleague set against the visiting San Francisco Giants with a 4-3 victory on Wednesday.

San Francisco led 2-1 in the ninth before Texas pulled even against Tyler Rogers. Isiah Kiner-Falefa delivered a leadoff single, stole second, moved to third on a flyout and scored on Adolis Garcia’s single to right field.

Nate Lowe began the 11th inning as the automatic runner and scored on Holt’s liner to center field off Jake McGee (1-2).

Brett Martin (2-0) allowed one unearned run over two innings for Texas, which won for just the second time in its last 14 games. Texas snapped a 13-game interleague losing streak dating to last year.

Jason Vosler and Chadwick Tromp opened the fifth inning with back-to-back homers to give San Francisco a 2-0 lead.

Both homers came against Texas ace Kyle Gibson, who gave up two runs on four hits over six innings.

Zack Littell started the game for the Giants and threw one inning before turning it over to Sammy Long, who impressed in his major league debut. Long allowed one run on one hit and struck out seven over four-plus innings. 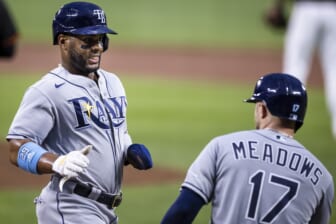 Texas recorded its first hit in the sixth inning when Eli White belted a leadoff double off Long, who signed a minor league deal with the Giants this offseason.

Dominic Leone replaced Long after White’s double and retired Jonah Heim on a fly ball to center, allowing White to move to third. White then scored on Kiner-Falefa’s groundout.

San Francisco moved ahead 3-2 in the 10th inning when Mauricio Dubon started as the automatic runner at second base, moved to third on Tromp’s single and scored when Austin Slater grounded into a double play.

Texas answered in the bottom of the 10th when Nate Lowe’s sacrifice fly scored Willie Calhoun, who began the inning at second and moved to third on Nick Solak’s flyout to right field.