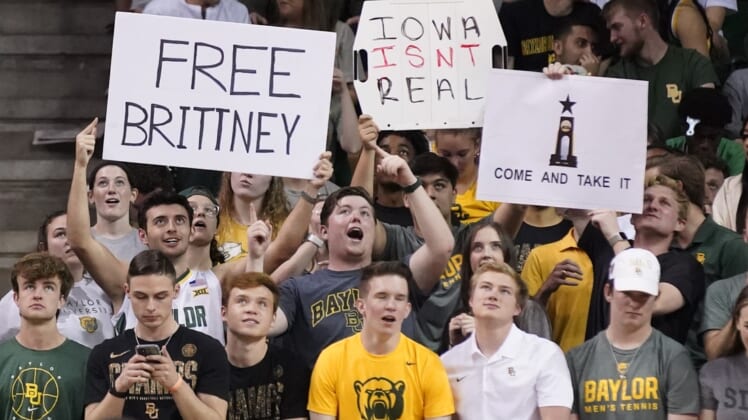 Mar 5, 2022; Waco, Texas, USA; The Baylor Student section hold ups a Free Brittney sign for Brittney Griner as she is currently being detain in Russia, during the first half of a game against the Iowa State Cyclones at Ferrell Center. Mandatory Credit: Raymond Carlin III-USA TODAY Sports

Secretary of State Anthony Blinken declined Sunday to address specifically the reported detainment of WNBA star Brittney Griner on drug charges in Russia but said the United States will assist any American held by a foreign government.

“Whenever an American is detained anywhere in the world, we of course stand ready to provide every possible assistance,” Blinken said. “And that includes in Russia.”

“There’s only so much I can say, given privacy considerations at this point,” Blinken said in a news conference with Maia Sandu, the president of Moldova.

“We have an embassy team that’s working on the cases of other Americans who are detained in Russia. We’re doing everything we can to see to it that their rights are upheld and respected.”

Griner, who plays for the Phoenix Mercury, faces charges of drug smuggling after being detained at a Moscow airport, multiple outlets reported Saturday.

The Russian Federal Customs Service confirmed that an American basketball player was taken into custody after officials found vape cartridges that contained hashish oil in carry-on luggage at Sheremetyevo Airport in February.

The Russian news agency TASS, citing a law enforcement source, identified the player as Griner, 31. Griner has played professionally in Russia during the WNBA offseason since 2015.

A seven-time WNBA All-Star and two-time Olympic gold medalist, Griner could face a sentence of up to 10 years in a Russian prison if convicted.

“We are aware of and are closely monitoring the situation with Brittney Griner in Russia,” the Mercury said in a statement on Saturday. “We remain in constant contact with her family, her representation, the WNBA and NBA. We love and support Brittney and at this time our main concern is her safety, physical and mental health, and her safe return home.”

The United States and other western nations have condemned Russia for its unprovoked invasion of Ukraine last week, and a former government official told Yahoo Sports that Griner could be used as a bargaining chip by the Russian government.

“If we want her out of jail, Russia is going to have some terms,” said Evelyn Farkas, the U.S. deputy assistant secretary of defense for Russia and Ukraine from 2012-15. “It could be a prisoner swap. They also could use it as an implicit threat or blackmail to get us to do something or not do something. Either way, they find it useful.”