Brian Stuard shot an 8-under par 64 on Thursday to take a one-shot lead at the Barbasol Championship in Nicholasville, Ky.

Play was suspended due to darkness at Keene Trace Golf Club.

Nine players were in the clubhouse tied for second at 7 under, one stroke behind. Another three are still on the course at 7 under.

Another seven players are T14 at 6 under, two strokes back.

Stuard, starting on the back nine, birdied his first two holes en route to nine for the round. His only blemish was a bogey on the par-4 18th, his ninth hole on the day. 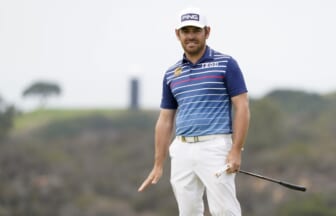 Tournament defending champion (2019) Jim Herman sits T21 after a 67. The tournament was canceled last year due to the coronavirus pandemic.

Play was suspended due to darkness at 8:47 p.m. ET with 30 players yet to complete their round. The first round will resume Friday at 8:10 a.m., with the second round beginning as scheduled at 7:45 a.m.