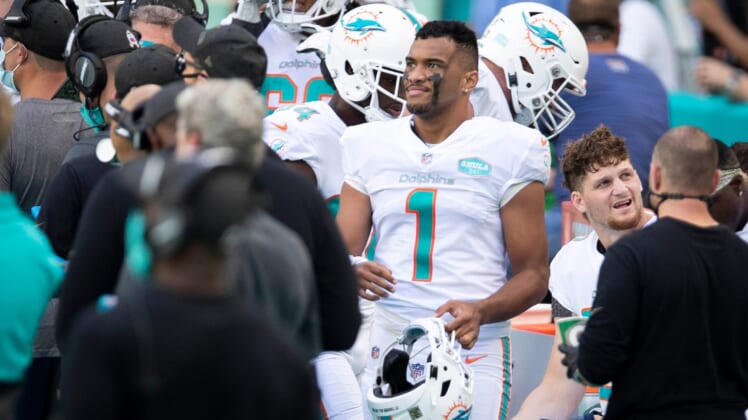 The Miami Dolphins shocked the masses back in Week 8 when they benched veteran quarterback Ryan Fitzpatrick for rookie No. 5 pick Tua Tagovailoa. Miami stood at 4-3 on the season and was seemingly headed in the right direction after an 0-2 start to the 2020 campaign.

Since then, Tagovailoa has more than proven young Dolphins head coach Brian Flores right. Miami is now 8-5 on the campaign and holding on to one of the final playoff spots in the AFC.

NFL Media’s Brian Baldinger joined Big Daddy & Friends on a recent Sportsnaut podcast to break down the former Alabama star and how he’s performed as a rookie.

“I did his first game against the Jets when he came in in mop-up duty and completed a couple passes,” Baldinger said. “You could see, mechanically, that he’s just really sound. Ball mechanics, ball fakes, following through. You know, where to step up in the pocket. He’s just been really well-coached. He’s a really tough kid and he’s a great athlete.”

Honestly, this is one of the reasons Miami had been linked to Tua Tagovailoa for over a calendar year before selecting him with the fifth pick in the 2020 NFL Draft. It’s not a surprise that a quarterback coached by the likes of Nick Saban, Steve Sarkisian, and Michael Locksley would be fundamentally sound out of the gate.

Even then, very few first-year pro quarterbacks show the type of intangibles we’ve seen from Tagovailoa thus far this season. He does not throw the ball into crowded coverage. He will tuck and run rather than make a mistake. Despite a 62% completion rate to date, Tagovailoa’s accuracy has been top-notch for the most part. A fair share of his incompletions are throwaways when Miami’s lackluster receiving corps can’t create separation. Tagovailoa also gets rid of the ball to avoid more frequent sacks behind a youthful offensive line.

Tua Tagovailoa stats as a rookie

Despite missing Week 12 to injury, it sure looks like Tua Tagovailoa has not missed a beat. What stands out here the most is the fact that he’s thrown nine touchdowns against only one interception on 184 total pass attempts. That’s just something you don’t see from a rookie signal-caller — even one drafted in the top five.

Moving forward on the season, Tua has an opportunity to prove himself even more to fans in South Beach. After holding his own against Patrick Mahomes and the Kansas City Chiefs with his career-high in passing yards to date, Tagovailoa will next square off against Bill Belichick’s New England Patriots, and close the season with road trips to Las Vegas and Buffalo. That head-to-head showdown with Bills star Josh Allen in the finale should offer a preview of what’s to come in this new era of the AFC East.

If the Fins were to earn a playoff appearance, it would set into motion the wide-ranging belief that Tua Tagovailoa is indeed the face of this franchise moving forward.

Given what we heard from Brian Baldinger, this is not an unlikely scenario.