Brewers will have hands full with Julio Urias, Dodgers 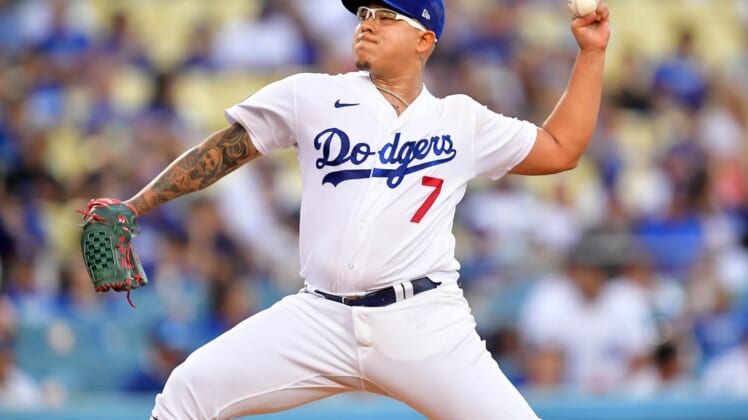 The Milwaukee Brewers will turn to right-hander Freddy Peralta as they try to get back on track against the visiting Los Angeles Dodgers on Monday night in the opener of a four-game series.

The Brewers dropped two of three at St. Louis over the weekend, including 6-3 Sunday in the series finale, to fall 1 1/2 games behind the Cardinals in the National League Central race.

The Dodgers, who have the best record in baseball at 79-34 and lead the NL West by 16 games, were blanked 4-0 at Kansas City on Sunday, snapping their 12-game winning streak.

Milwaukee’s bullpen continues to struggle following the trade of All-Star closer Josh Hader to the San Diego Padres two weeks ago. Taylor Rogers, acquired in the deal, gave up a pair of homers during a four-run eighth inning on Sunday, including a three-run shot by Albert Pujols.

The Brewers salvaged one victory against the Cardinals despite scoring just seven runs in the series. Milwaukee is 11-34 when scoring three runs or less.

“It was three good games,” Brewers manager Craig Counsell said. “They came up with the big hits in the deciding game to get the series.”

Peralta, sidelined from late May to early August with a shoulder strain, will make his third start since coming off the injured list. He pitched five solid innings to pick up the win in his last start, a 5-3 victory over Tampa Bay on Tuesday. Peralta allowed two runs on two hits with four strikeouts and no walks in a 65-pitch outing.

“I thought Freddy threw the ball well,” Counsell said after the game. “Got a little tired but gave us five good innings and put us in a position to win.”

Peralta is 1-0 with a 1.80 ERA in two career starts against the Dodgers. He picked up the win last season in a 3-1 victory at Milwaukee, giving up one run on one hit in seven innings.

The Dodgers managed just two hits Sunday in their loss to the Royals, one day after hitting six homers in a 13-3 victory.

“It’s baseball, you’re not going to win the next 50 games in a row, so I think we were due for one,” said Dodgers second baseman Gavin Lux. “We’ll just get back to it tomorrow and face another good rotation.”

Urias is 4-1 with a 2.29 ERA in six career starts against the Brewers. He was 2-0 in two starts last season against them, allowing just two earned runs in 13 1/3 innings. He is 3-0 in three starts in Milwaukee.