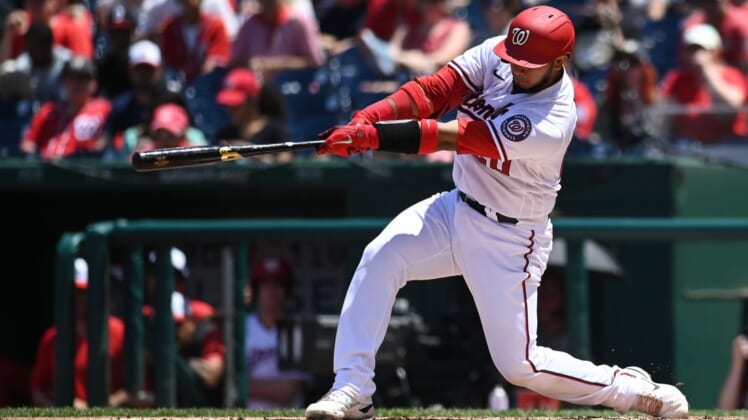 Willy Adames drove in three runs with a double and a home run as the Milwaukee Brewers halted an eight-game losing streak by beating the host Washington Nationals 4-1 on Sunday afternoon.

The Nationals were denied their first series sweep of the season after slugging seven home runs across the first two games of the homestand.

Brewers starter Jason Alexander went 4 2/3 innings and was charged with one run on seven hits. Hoby Milner (3-1) was the winner with 1 1/3 shutout innings. Josh Hader worked the ninth, striking out the side for his 19th save.

The Nationals used spot starter Paolo Espino (0-1) for 3 2/3 innings as he held the Brewers to one run on four hits.

The Brewers scored first on an Adames double in the third inning. Two innings later, it was 3-0 after Adames, who returned from the injured list a few days ago, hammered a two-run homer off Evan Lee.

Adames had his first multi-RBI game since May 5, when he drove in four.

The Nationals, who dropped to 11-19 in home games, got on the board with Josh Bell’s sacrifice fly in the fifth. It was Bell’s sixth RBI of the series.

Milwaukee added an insurance run when McCutchen off the ninth with his fourth home run of the season.

Brad Boxberger and Devin Williams both pitched an inning out of Milwaukee’s bullpen before Hader finished off the victory.

Tyrone Taylor and Omar Narvaez both notched two hits for the Brewers.

Cesar Hernandez and Luis Garcia each had two hits for the Nationals, while Keibert Ruiz’s double was the lone extra-base hit. Washington stranded 10 runners on base.