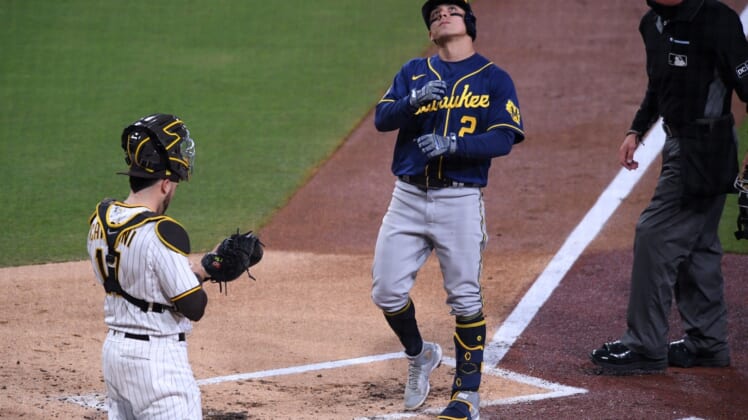 Four Milwaukee pitchers held the Padres to two hits. Woodruff (1-0) allowed the one run on a hit and three walks with seven strikeouts in six innings, lowering his earned run average to 1.96.

After J.P. Feyereisen and Brent Suter each tossed a scoreless inning, Josh Hader pitched around a walk in the ninth inning for his second save of the season.

Musgrove (2-2) allowed two runs on four hits and a walk with a career-high 13 strikeouts in seven innings. However, two of the hits were the home runs by Urias and McKinney.

Musgrove, a native of San Diego County, was making his first start at Petco Park since throwing the first no-hitter in Padres history on April 9 at Texas. He leads the National League with 37 strikeouts.

The Padres were ahead 1-0 before Urias hit his second homer of the season leading off the third. An inning later, the Brewers shortstop left the game for an unspecified reason.

McKinney homered with one out in the fifth to put the Brewers ahead to stay. Taylor opened the eighth with his first homer of the season, a 420-foot drive to center off left-handed reliever Drew Pomeranz.

The Padres scored their run on their first out of the game. Jurickson Profar drew a walk to open the bottom of the first and moved to third on Jake Cronenworth’s single. Profar scored on Fernando Tatis Jr.’s groundout to short.

Woodruff retired 18 of the last 20 hitters he faced.

The Padres’ second hit was a Victor Caratini single to right leading off the eighth against Suter. However, Caratini was eliminated on an inning-ending, double-play grounder by Profar — the major-league-leading 22nd double play grounded into by the Padres this season.